PHOTO: This Woodhaven street was one of many across the borough that remained untouched by a plow truck more than 24 hours after snowfall had ceased. Photo Courtesy of Alex Blenkinsopp

“I hear you, Queens. We’ve got 850 @NYCSanitation plows clearing your streets. We won’t quit until the job is done.”
That now-infamous tweet was posted on Sunday, Jan. 24, at 12:42 p.m. by @BilldeBlasio, the official Twitter account of the 109th mayor of New York City.
The replies came fast and furious from frustrated Queens residents whose borough—especially communities such as Woodhaven, Ozone Park, Middle Village, Woodside, and Ridgewood—bore the brunt of historic winter storm Jonas that unloaded more than 30 inches of snow on the city.
Elected officials also hopped on various social media platforms to blast the administration for seeming to keep Queens out of plowing plans, and for not closing public schools on Monday. 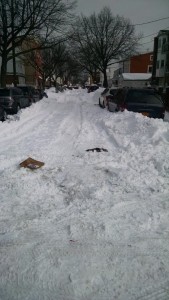 “I spoke to principals in my district. They said that attendance was extremely low, that buses were stuck in the snow, and we received lots and lots of complaints from parents wondering why school was open in the first place,” said City Councilman Eric Ulrich (R-Ozone Park) on Monday at a press conference at 85th Road and 96th Avenue in Woodhaven. “Streets like these are still inaccessible, not only to cars and buses, but to emergency vehicles.”
Ulrich went on to say that the City neglected its taxpayers.
“What do we want here? We want our fair share of city services. We want to know why the City of New York and why Mayor de Blasio did not dedicate the proper equipment, the proper manpower to cleaning the streets of this community and so many other neighborhoods in the Borough of Queens. The city failed. They did not do an adequate job of cleaning the streets.”
The Woodhaven Residents’ Block Association said on Sunday, “We thank the many hard-working personnel of the Department of Sanitation. That said, we in Woodhaven are extremely disappointed by the City’s performance during and after the blizzard. Even now – 54 hours after the snow started to fall – dozens of blocks in Woodhaven still have not been plowed once. Sanitation trucks have been stuck on our streets for hours. There was no reason for the City not to plow many of our roads a single time during the travel ban, while other areas were plowed multiple times. We have been overwhelmed with messages from justifiably frustrated residents. We hope Mayor de Blasio realizes that this performance in Woodhaven deserves a failing grade.”

State Sen. Joe Addabbo, Jr. (D-Howard Beach) also wondered why schools were open on Monday.
“It is my hope that in the event of another major winter storm, our Mayor makes the more educated and safer decision of closing public schools while cleanup continues,” Addabbo’s statement read, in part.