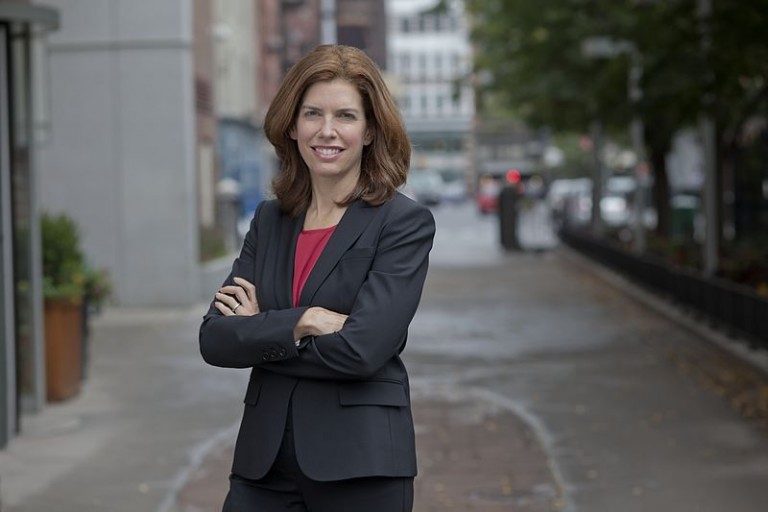 Mayor Bill de Blasio this week appointed Department of Consumer Affairs Commissioner Julie Menin to serve in the same role in the Mayor’s Office of Media and Entertainment.

Menin, who succeeds Cynthia Lopez, will head up an agency that supports a filmed entertainment industry that now contributes nearly $9 billion annually to the local economy, according to an independent study that details the growth and economic impact of the Big Apple’s media and entertainment industries.

The latest figure reflects an increase of $1.6 billion since 2011. The study credited the spike to film and TV production spending on items such as crew salaries, catering, location rentals, set construction, set decoration, costumes, and other needed supplies. This continued increase in spending creates a ripple effect through the city’s economy, creating more economic activity and jobs, indirectly supporting an additional 20,000 full-time equivalent jobs, according to the report.

Many popular television and Web series are filmed in Queens, which is home to Silvercup Studios in Long Island City and Kaufman Astoria Studios.

“Julie has shown time and again that she is a highly effective leader who has the skills and passion to get the job done for New Yorkers,” de Blasio said. “As DCA Commissioner, Julie saved everyday New Yorkers thousands of dollars, reduced fines on small businesses and spearheaded campaigns to uplift NYC’s residents in all five boroughs. I have the utmost confidence she will bring that same spark and commitment to MOME as it grows its reach in the media and entertainment community.”

De Blasio hailed Menin as “instrumental” in launching and leading many of his signature projects, including the Paid Sick Leave Law, the Small Business Relief Package to reduce fines on establishments, and the implementation of the Living Wage Executive Order.

With Menin’s appointment, de Blasio added, MOME will amplify its efforts to support and strengthen the City’s media and entertainment economy. In addition to film and television, Menin is set to lead the administration’s outreach to digital content and distribution companies, the advertising industry, and will broaden the office’s engagement with the Broadway and off-Broadway theater communities.

“Julie Menin is an outstanding choice to lead the Mayor’s Office of Media and Entertainment,” said Les Moonves, president and CEO of CBS Corporation. “She appreciates our industry’s needs and communities’ priorities and will be a strong partner with the entire industry to produce more projects and create more jobs in New York.”