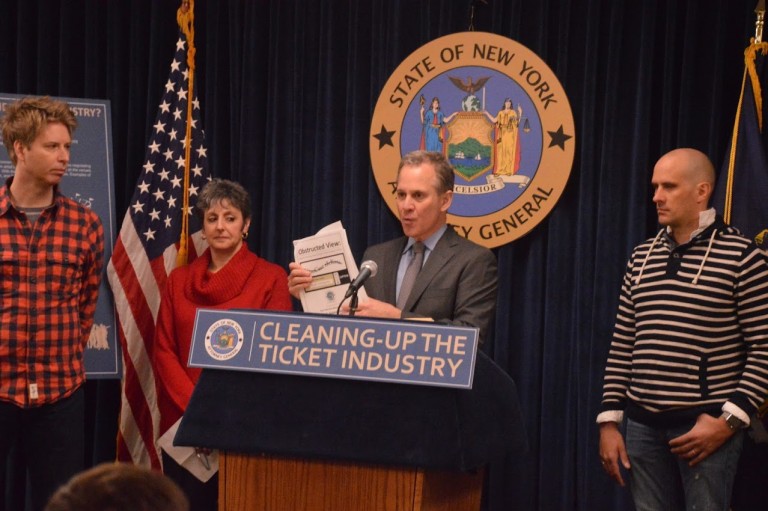 Adele, the wildly popular singer/songwriter whose latest release, “25,” is annihilating industry records, is set to play six September dates at Madison Square Garden as part of her North American tour.

Unsurprisingly, the roughly 120,000 tickets to the MSG gigs were gone mere minutes after the tour went live.

Ever wonder how that’s even possible?

State Attorney General Eric Schneiderman did. And after a series of citizen complaints, he tasked his office with a wide-ranging investigation into the concert and sports ticket industry. The results were released last Friday.

“Obstructed View: What’s Blocking New Yorkers from Getting Tickets,” details the middle-men and troubling industry practices that work to keep affordable tickets out of the hands of ordinary Empire State residents, Schneiderman said.

“Ticketing is a fixed game,” Schneiderman declared at press conference in Buffalo. “My office will continue to crack down on those who break our laws, prey on ordinary consumers, and deny New Yorkers affordable access to the concerts and sporting events they love. This investigation is just the beginning of our efforts to create a level playing field in the ticket industry.”

For the most popular concerts, “Obstructed View” found that many tickets are never made available to the general public in the first place. Rather, a majority of tickets for major entertainment events are either put “on hold” and reserved for a variety of industry insiders including the venues, artists or promoters, or reserved for “pre-sale” events and made available to non-public groups, such as those who carry particular credit cards.

On average, more than half of all tickets — 54 percent – are reserved for insiders. Those reserved tickets are split between insider holds (16 percent) and pre-sales (38 percent).

Additionally, “Obstructed View” discovered that third-party brokers resell tickets on websites like StubHub and TicketsNow at average margins of 49 percent above face-value—sometimes more than 1,000 percent.

Some of the brokers are using illegal specialty software – called “ticket bots” — to quickly purchase as many desirable tickets as possible and resell them at a significant markup. For example, on Dec. 8, 2014, a single broker used a bot to purchase 1,012 tickets to a June 2015 U2 show at Madison Square Garden within the first 60 seconds of the sale.

“Obstructed View” confirms that hundreds of thousands of tickets are being acquired using illegal software.

“The revelation that the concert and sport ticket industry is unfair is nothing new,” said Assemblyman Jeffrey Dinowitz (D-Bronx), chairman of the Committee on Consumer Affairs & Protection, “however discovering how deep it goes is certainly unsettling.”