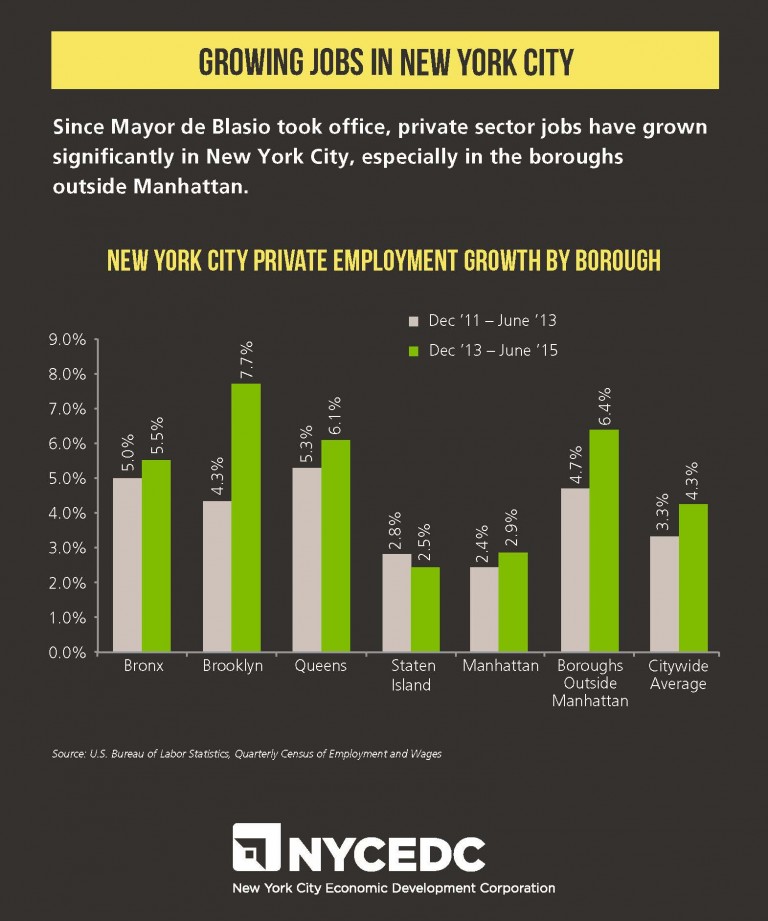 The New York City Economic Development Corporation this week announced that since Mayor de Blasio took office, boroughs outside of Manhattan have added jobs at a significantly higher rate than in previous years. Brooklyn showed an increase of 7.7 percent, while Queens’ job growth increased by 6.1 percent, more than double the growth displayed by either Staten Island or Manhattan. Overall, during the first 18 months of the administration, the number of private sector jobs in non-Manhattan boroughs increased by 6.4 percent, significantly higher than the 4.7 percent increase in a comparable timeframe from 2011 to 2013 in the outer boroughs, demonstrating increased economic opportunity for many New Yorkers in neighborhoods that had been previously left behind. These findings were the result of an analysis done by NYCEDC based on recently released job data through June 2015, the most recent period for which borough specific job numbers are available.

Growth in boroughs outside of Manhattan can be attributed in part to gains in Health Care & Social Assistance, Professional, Scientific, & Technical Services, and Accommodation & Food Services, the largest growing sectors since December 2013.  The launch of the $150 million NYC Early Stage Life Sciences Funding Initiative, the creation of the first ever all-inclusive online hub for the City’s tech ecosystem, Digital.NYC, and the Food Business Pathways program, providing NYCHA residents with the tools and knowledge needed to start a food business, have all contributed to this development.  With the administration’s support of well-paying sectors, average wages since 2013 have increased $78 per week, providing economic mobility for New Yorkers across all five boroughs.
Total jobs within all five boroughs have increased by 4.3 percent since de Blasio’s tenure began, reaching an all-time high of 4.24 million this winter.  The unemployment rate in New York City is 5.0 percent, down 3.1 percentage points during that timeframe.