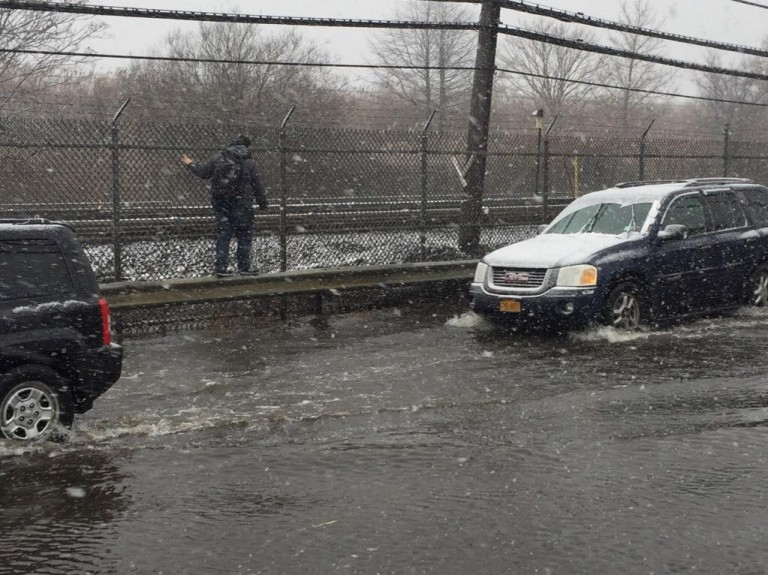 Barely a couple weeks removed from the death and disruption wrought by Winter Storm Jonas, many Howard Beach residents on Monday and Tuesday faced a formidable and all-too familiar foe: floods.

Some neighborhoods absorbed more impact than others – Old Howard Beach and Hamilton Beach were deluged; images depicting scenes eerily similar to early stages of Superstorm Sandy, which tore through parts of southern Queens and the Rockaway Peninsula a little over three years ago.

This week, two powerful storm systems off the coast of the eastern seaboard and high tides due to the new moon were the culprits, setting up vulnerable communities for moderate coastal flooding.

“We’ve been dealing with floods for a long time. However, since Sandy, the tide floods are worse,” noted Joann Ariola, president of the Howard Beach-Lindenwood Civic. “These are so much worse than the floods that people who have lived here 40-50 years say they had to deal with back then.”

While Ariola acknowledged Mother Nature’s might, she also said that the government needs to ensure the safety of its citizens. Regular catch-basin maintenance and employing check valves can help prevent floods or control the damage, Ariola said.

“But we need an immediate fix,” she added.

A spokesperson for Mayor Bill de Blasio said such weather-related situations are exactly why the City is heavily investing in climate resiliency through a $20 billion OneNYC Plan underway around Jamaica Bay and across the five boroughs.

That includes short term measures already in place, such as 3.5 million cubic yards of additional sand in the Rockaways, almost 5 miles of dunes on Queens beaches, and upgrades to bulkheads along Beach Channel Drive. The Parks Department also deployed temporary protections ahead of Jonas that remain in place. Combined, these measures mitigated some of the flood impacts this week.

Billions more in resiliency investments are underway, the spokesperson added, including a massive upgrade of green infrastructure in southeast Queens, street reconstruction/raising in Broad Channel, extensive efforts to enhance shorelines and build out bulkheads, and a partnership with the US Army Corps of Engineers on a large-scale resiliency project across the Bay.