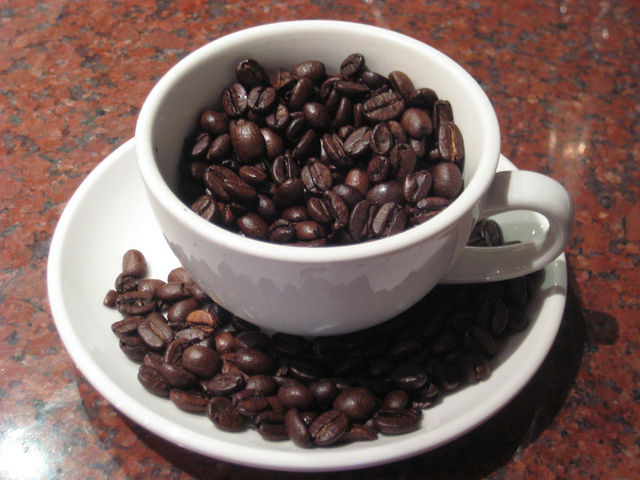 PHOTO: These beans might actually be good for your heart as well as your soul.  The right cup of coffee can make the difference between a good day and a bad day — and over time can benefit overall health in myriad ways. Photo Courtesy of Amanda/flickr.com

Joe. Java. Brain Juice. Whatever you call coffee, whether you like it sweet and creamy or black and strong, whether to sip and chat over, or down quickly in an effort to wake up, few among us don’t at least occasionally enjoy a nice brimming cup every now and again. Or two. Or three.

Starbucks first opened in Seattle in 1971, and by the mid-1990s it had become a household name, with a shop on every block. For a while the megabucks company had all but usurped the rising market on American cafés. But now, with our healthier attitude as a nation and our increased awareness of the importance of exercise and nutrition, the growing popularity of this healthily beneficial nectar has caused competition from all corners – from smaller, more unique coffee-vending establishments to bigger-name commercial enterprises such as Dunkin’ Donuts and even McDonald’s. Because of all the competing efforts, the coffee just keeps getting better and better. With obsession can come perfection.

McDonald’s, whose coffee used to taste like a cross between ashes and mud, now has a top-of-the line list of offerings, from lattés to iced and even frozen coffee. And at McDonald’s, every size (regular) coffee you can buy is the same price. Who would choose a “small?” we wonder.

Indeed, large and multiple coffees are becoming ubiquitous in our daily drinking habits as a society, and with good reason: a whole host of health benefits can be reaped from drinking the aromatic brown liquid in moderate to large doses: including lowered risk of cancer, reducing depression, links to lessened heart strain, and even protecting the liver from too much drinking of a distinctly different kind of liquid – alcohol.

The two most common coffee bean species are the Arabica and the Robusta. Originally from Central and South America, Arabica is grown across the globe and makes up over seventy percent of all the coffee produced in the world. (This percentage would likely be higher, were the trees not so susceptible to disease). Depending on where the beans are grown, you might taste great differences among Arabica coffees. Ethiopian Arabica, for example, is notoriously smooth, while Arabica grown in neighboring Kenya are known for a more bitter taste. Robusta beans, on the other hand, grown primarily in Asia, are more inherently bitter due to their lesser oil content. They contain 50 percent more caffeine than Arabica beans do and are more likely to be included in blended cheaper coffees as well as expensive espressos.

With the shift in American culture, we’ve begun competing with the entire rest of the world for coffee (bean) production and brewing techniques, whereas at one point, Italy, Cuba, and even places like Turkey and India could boast of far better coffee. Coffee trees like water, constant humidity, and warm climates, so they are most often successfully grown in South America, Africa, and Asia – though as any coffee lover will tell you, Hawaiian-grown beans would give any foreigners a run for their money.

Kona, Sumatra, or Colombian – whatever variety one prefers, taste will inevitably develop with experience. Fortunately for us all, the quality and diversity of available coffee is so great these days that that experience will surely be a heady one.