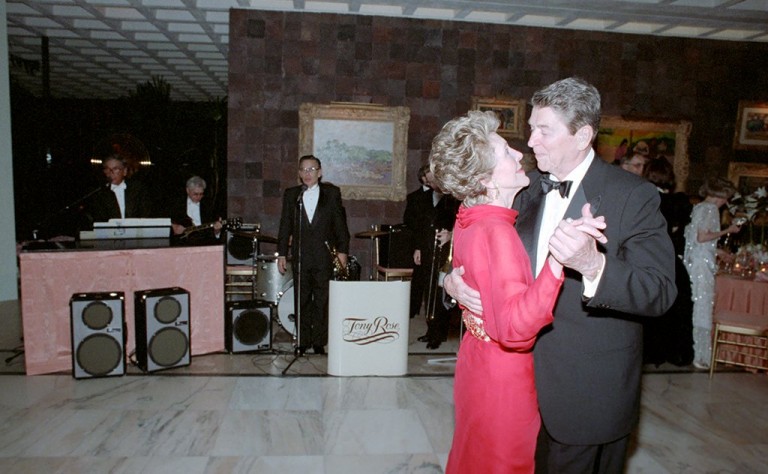 It’s odd to write these words, because their meaning seems to mark the end of an era:  Nancy Reagan died this week.  Regardless of whether or not you agreed with her husband’s politics, you can’t argue the lasting impact she had on this country and our world.

And, ironically, we write this on International Women’s Day, a day to celebrate those unique and substantial contributions such as hers.

Few other First Ladies have been as controversial or as criticized as Nancy was during Ronald’s presidency, for the elaborate and expensive embellishments she made to the White House and for the designer clothes she’d never be caught without.  Though the $200,000 china she bought was said to have been paid for by private donations she personally raised, the country was in a deep recession at the time, so, well, it looked bad.  The iconic red of that china, as well as of the dresses and suits she so often wore (and will be buried in) should, we’d argue, actually bear her name.  She made it graceful, not salacious, and maintained its power in her wearing of it.

Indeed, Nancy was a woman of quiet power.  While always careful to stand by her man, as it were, few, including the President himself, denied or begrudged the support and strength she provided the office.  And she somehow managed to do it in a way that never made it seem she was overstepping the bounds of First Lady.  Who can forget the famed, brilliantly simplistic “Just Say No” campaign, essentially Nancy’s brain child, which was such a huge part of our nation’s “War on Drugs?” The name of this years-long public service drive came about when she answered a young student’s question about what to do when someone offers you drugs.  If you’re too young to remember Just Say No, think of it as the parent ad campaign to the fried egg in “This is your brain on drugs,” which came just a few years later.

“Nancy Reagan was a trailblazer who was not afraid to tackle the hard issues America was facing during her time as First Lady. She was a First Lady who was emulated and respected for her intelligence, passion and class. She will be remembered fondly,” said Joann Ariola, Queens Republican district leader.

“Class.”  That’s a good word to use in describing Nancy Reagan.  Having been educated at Smith College, she was clearly a bright woman who had an influential, though deferential, role in her husband’s leadership when he needed her, then later and after he died, as an advocate for stem cell research and other causes.  Despite having made it widely known that she believed her life “began with Ronnie,” she’d had a fairly successful acting career before they even met. Her reputation at the White House was anything but demure.  Though in public her eyes were often lowered when they weren’t staring lovingly at her husband, and her mannerisms could seem demure, many who worked most closely with her called her intimidating.

Or maybe that was just the “Nancy Reagan Red” she wore.  Any interest, O.P.I. or Crayola?