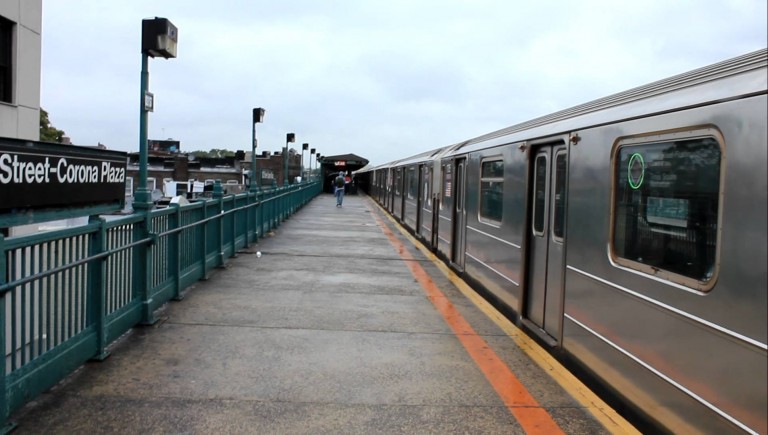 PHOTO:  A man allegedly pushed a teenage girl onto the tracks as a 7-train rolled into the 103rd Street-Corona Plaza station on Saturday, March 5. Photo Courtesy of YouTube/The TransportNet

Despite having been shoved in front of a train two weeks ago on Saturday, March 5, one could say it was the luckiest day in the life of the teenager who lived to tell about it.

The unidentified 15-year-old girl faced unspeakable horror when a man threw her onto the tracks as 7-train rolled into the station at 103rd street and Corona Avenue.

George Pautt, 38, of 42nd Avenue in the Corona section of Queens has been charged with second-degree attempted murder for pushing the teenage girl.

“The defendant is accused of doing what subway commuters fear the most – having someone suddenly shove them onto the tracks as a train rolls into the station. The young victim in this case managed to survive by squeezing herself between the platform and the wheels of the train,” said Queens DA Richard Brown.

The DA characterized the attack as heinous and speculated that the victim will likely be terrorized by the memory of the incident for the rest of her life. “The defendant… must be punished for this heinous act and locked away from society for a very long time,” Brown said.

According to the charges, as the teen was waiting for a Manhattan bound train, witnesses saw Pautt suddenly push the girl onto the tracks. He then fled the platform and exited the train station.

Quick thinking on the part of the victim helped her position herself between the platform and the tracks thereby avoiding being crushed by the oncoming 7 train.

The girl had to be extracted by the FDNY. She was taken to a nearby hospital and treated for bruising and lacerations to her wrists, ankles and ribs.

If he is convicted, Pautt faces up to 25 years in prison.