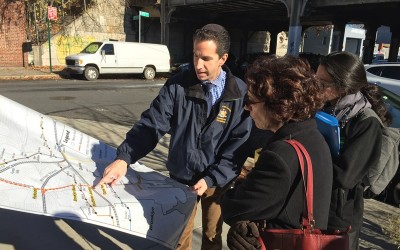 A momentous development this week on the borough transportation front—a result that one Queens assemblyman has characterized as “gargantuan”—was actually crafted 162 miles away in Albany.

The Assembly’s one-house budget resolution will include funds for a study of reactivating the old Rockaway Beach Rail Line, according to Assemblyman Phil Goldfeder (D-Howard Beach).

The Lower Chamber on Monday released its spending plan for the 2016-2017 state budget; and the proposal includes language directing the Metropolitan Transportation Authority to conduct a comprehensive feasibility study of the reactivation of the Line – a defunct, 4-mile spur that was put into service in the late 19th Century under the control of the Long Island Rail Road. The RBRL connected Rockaway and southern Queens with Rego Park, provided area residents with expedient access to other parts of the city, and 40-minute commutes to Midtown Manhattan from the Peninsula. In the early 1960s, parts of the railroad service were condensed, sectioned off, and eventually closed in 1962.

According to the text of the Assembly resolution, the Legislature justifies the appropriation of funds for the analysis on the grounds that “constructing new mass transit routes and services reduces vehicle traffic and alleviates congestion.” The MTA would be required to complete the study and submit it to the governor and the leaders in both houses of the legislature no later than March 1, 2017.

“This study will provide us with an accurate picture of the state of the line and show not just what it would cost to reactivate, but also the impact this would have on thousands of commuters in the community,” Goldfeder noted, hailing Assembly Speaker Carl Heastie for his work in allocating the funds in this budget.

With the study, Goldfeder said he expects the MTA to assess the current condition of infrastructure along the 4-mile right-of-way, as well as the full cost of reactivating the line for passenger service – which many have ballparked at around $1 billion.

Goldfeder, a Rockaway resident, also said he hopes that the study will weigh in on the benefits of reactivation, including potential ridership (could serve up to 250,000 commuters per day) and the economic benefits to surrounding communities.

Philip McManus, chairman of the Queens Public Transit Committee, said the civic organization is “extremely hopeful” after hearing Tuesday’s news, and that it intends “to actively participate” in the MTA probe.

“We need to change the mentality that we don’t deserve high quality railways,” McManus said. “The City and the MTA think they can reallocate our services and funding because we don’t have enough ridership. This mentality allows our services to disappear and forces commuters to drive and get tickets. We will never get new services with this type of thinking.”

There is, of course, another element to the saga of the Line. In 2014, Friends of the QueensWay and the Trust for Public Land released the QueensWay Plan, a project that involves converting the RBRL into a 3.5-mile, $120 million public park boasting trails and amenities, similar to the highly successful High Line in Manhattan.

“It is important to note the concept of reactivating the Rockaway Beach Branch has been studied multiple times by the MTA and Port Authority over its 60 years of abandonment and, in each instance, was found to be infeasible,” Friends of the QueensWay’s Andrea Crawford told The Forum on Wednesday. “We know the consequences – elimination of subway access to the Rockaways, harming of our quality of life including closure of our little leagues and significant distractions in our schools, increased commute times for Queens and Long Island residents, and billions of taxpayer dollars diverted from other transportation needs around the region. Meanwhile, it is the communities living along the QueensWay that are suffering from the property’s profound neglect. That is why, working together as a community and with the support of many elected officials who actually represent these communities and dozens of local community and citywide advocacy organizations, we have supported and made significant progress towards the creation of the QueensWay. When completed, the QueensWay will bring much-desired green space, transportation, economic development, environmental and health benefits to our communities.”

For now, regardless of its findings, Goldfeder is praising the proposed study as a step in the right direction for Queens families living in so-called transportation deserts.