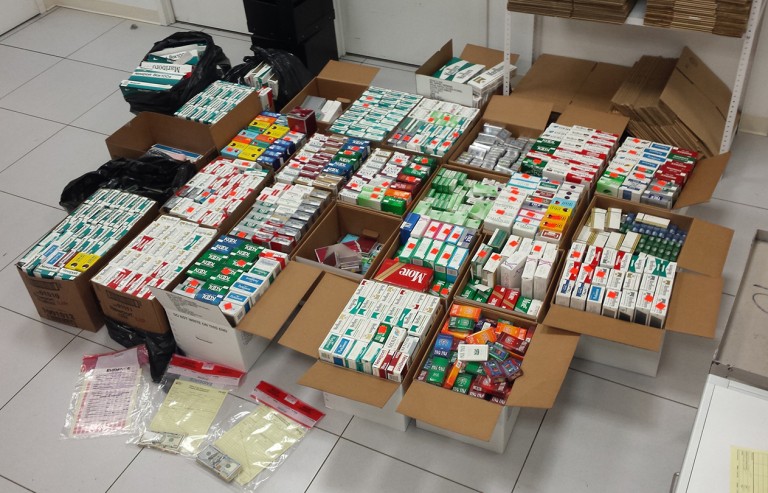 PHOTO:  Investigators last Friday discovered a stash (similar to the one pictured) of illegal cigarettes and fake tax stamps inside a warehouse in Richmond Hill. Photo Courtesy of NYS Dept. of Taxation and Finance

Two Brooklyn men have been charged with engaging in the illegal distribution of untaxed cigarettes and possessing counterfeit tax stamps. Police executed a court-authorized search warrant and allegedly found hundreds of thousands of cigarettes. If legally sold, the packs would have generated tens of thousands of dollars in revenue for the state.

“Selling untaxed cigarettes is a million dollar industry that cheats the city and state out of much-needed revenue. As a result of schemes like the one alleged here, taxpayers must dig deeper in their pockets to pay higher taxes,” said Queens District Attorney Richard Brown. “Each stamp on a legal pack of cigarettes represents both excise and sales tax that would have been paid to New York State and New York City. Consequently, in this particular case, the alleged counterfeit stamps along with the seized cigarettes represent a loss of more than $100,000 in tax revenue.”

They were released on their own recognizance and ordered to return to court on April 28. If convicted, each faces up to 15 years in prison.

According to the charges, police responded last Thursday to a 911 call regarding a burglary in progress at a warehouse in Richmond Hill. Cops allegedly encountered two people inside who refused to leave the premises.

Last Friday, police executed a court-authorized search warrant at the warehouse and allegedly recovered a sheet of forged New York State cigarette tax stamps as well as three irons, which can be used to affix the tax stamps to cigarette packs, and 1,511 cartons of cigarettes, which contained 302,200 individual cigarettes inside.

All cigarette packages sold in New York City must bear a joint New York City/New York State tax stamp, and only a licensed stamping agent can possess untaxed cigarettes and affix the tax stamp on the packages.