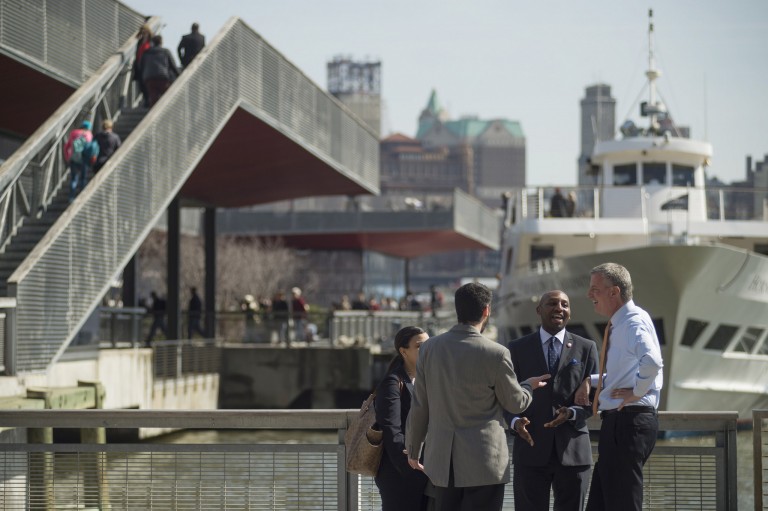 With even his 6-foot-6 frame dwarfed by the crowded, classic skyline, Mayor Bill de Blasio last Wednesday beamed as he announced that the Citywide Ferry Service is on track to launch next year, with the selection of California-based Hornblower, Inc. as its operator.

The Rockaway, Astoria, and South Brooklyn routes will be ready for the first 2017 voyages. When fully operational by 2018, the Citywide Ferry Service will operate from 21 landings and carry an estimated 4.6 million trips per year across six routes.

“For the price of a single subway ride, tens-of-thousands of New Yorkers are going to have a new public transit option linking them to jobs, education and opportunities across the city. It’s going to be a commute like no other: fresh air, harbor views and a fast ride on the open water,” de Blasio gushed. “We are selecting an operator with an incredible track record providing service in our harbor. We look forward to launching with Hornblower next year.”

Hornblower CEO Terry MacRae said his firm “is honored to take the helm of Mayor de Blasio’s vision for a more integrated transportation network that will make commuting and connecting easier” in the five boroughs.

“The Hornblower Family of Companies is growing and we’re about to make it easier to commute and connect in NYC!” the corporation posted to its Facebook page last week.

The City Economic Development Corporation indicated that it selected Hornblower “on the basis of its ability to provide the highest quality service at the best value to taxpayers.”

Hornblower, according to the administration, has operated in the New York Harbor for a decade and carries 13 million passengers every year. Boasting a history as “a strong unionized employer,” the corporation currently employs more than 450 people in the Harbor; the Citywide Ferry Service is expected to generate at least 155 “new, good-paying jobs” in the Harbor, de Blasio said.

As part of the service, Hornblower will be delivering at least 18 new boats, which will be able to carry at least 149 passengers, and be equipped with WiFi and engines that meet the highest Environmental Protection Agency standards. All docks and boats will be accessible to people in wheelchairs and fully compliant with the Americans with Disabilities Act.

“While I could criticize the decision to go with an out-of-state service provider, who has minimal experience in navigating large numbers of individuals in our city waters, I must also work towards a reliable ferry service that is desperately needed by my constituents,” said State Sen. Joe Addabbo, Jr. (D-Howard Beach). “I remain cautiously hopeful that Hornblower Cruises will be able to provide new, appropriate boats and other important resources the Mayor promised for this initiative. I intend to keep a watchful eye over the company and the process to resurrect the ferry to ensure my constituents get what they rightfully deserve. As I have stated before, the Rockaway Ferry can only be as successful as its chosen operator allows it to be. The future of transportation in the Rockaways now lies in the hands of the Mayor’s administration and its selected operator Hornblower, and we must make certain they run this service adequately.”

The City is investing $55 million in infrastructure upgrades, including building 10 new ferry landings and rehabilitating six others. The City is also providing $30 million in operating support per year, over a period of six years.