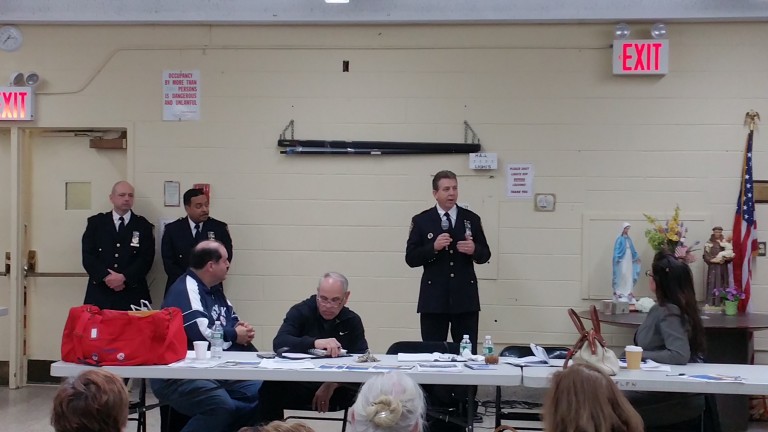 In a symbolic changing of the guard Tuesday night at the Howard Beach-Lindenwood Civic meeting, Deputy Inspector Jeff Schiff said goodbye to dozens of community leaders, residents, business owners, and elected officials, and introduced Capt. James Fey, his successor as commanding officer of the 106th Precinct.

Schiff, who now helms the 105th Precinct, fought back tears several times during his remarks as he recognized the “bittersweet” event.

“It’s a great step in my career,” he said of the move to the Queens Village command, “but I’m very sad to leave.”

Schiff went on to thank all the stakeholders for contributing to the overall positive state of the south Queens command that includes Howard Beach, Hamilton Beach, Lindenwood, Ozone Park, South Ozone Park, and Richmond Hill. Schiff noted that the strides made by the 106 over the past two-and-a-half years directly contributed to his new assignment.

“I wouldn’t have been given the opportunity by [Assistant] Chief [David] Barrere if it wasn’t for you,” he said. “So, thank you. And if you ever need me, just call – I’ll be there.”

Prior to introducing Fey to the populace, Civic President Joann Ariola introduced the populace to Fey.

“In here, you have a lot of intellectual and community capital,” she said inside St. Helen Catholic Academy. “We welcome you with open arms.”

Fey, whose last stop was the 103rd Precinct in Jamaica as its executive officer, delivered a brief overview of his career, “where I’m from, and how it might have had an impact on my thinking.”

He said every number in his command’s crime statistics “represents a victim,” and “until we’re down to zero, our job is not done.”

In his first report to the civic, Fey indicated that there have been 84 reported offenses in the 106 over the past 28 days; a 21 percent dip compared to this time last year. However, just three of those crimes occurred in Howard Beach and Lindenwood.