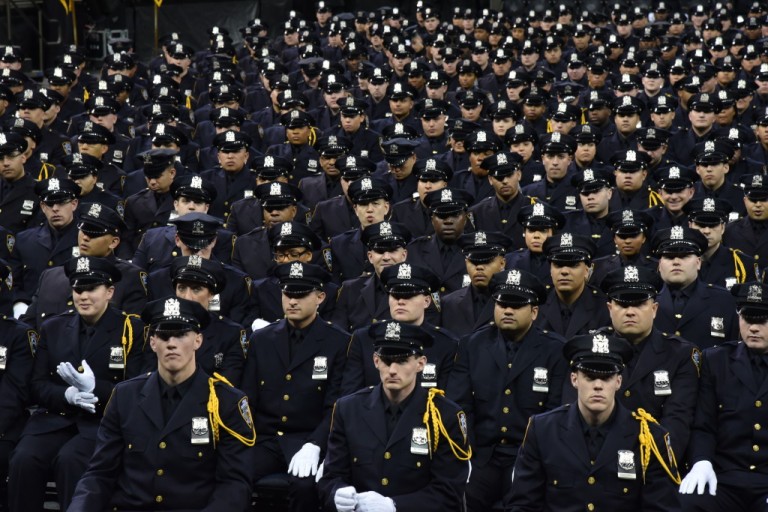 PHOTO: Police Commissioner Bill Bratton last week told the latest group of NYPD academy graduates that they “have more technology and training than any class” ever. Courtesy of NYPD

Moments before Pomp and Circumstance paraded through Madison Square Garden, before 634 freshly minted Members of the Service last Friday officially graduated from the NYPD Police Academy in a ceremony befitting the World’s Most Famous Arena, Police Commissioner Bill Bratton saluted the historic class in a personal message he texted to their new department-issued smartphones, reminding each rookie that they “have more technology and training than any class that has ever come before” them.

“The technology, training, and equipment will help keep you safe as you keep the city safe,” Bratton continued. “But the career you will have depends on you. It is up to you to have a career that matters, to have a life of significance.”

More than half of the class is men and women of color; 32 percent are Hispanic.

“That is the all-time high in the history of the NYPD,” noted Mayor Bill de Blasio.

“You hail from 36 countries, and you speak 22 languages – and I guarantee you, you will use all 22 of those languages in the work you do, and that will only make you better at your job,” he added.

De Blasio also thanked the 57 veterans of the U.S. Armed Forces in this year’s rookie class.

Hizzoner went on to detail the brave new world of law enforcement in which the probationary police officers will be working, including the forefront of counterterrorism and the 500-strong Critical Response Command.

“[Y]ou’re joining a winning team that has driven crime down to record lows and that took decades of hard work – decades of improvement, of the strategic approach,” de Blasio said. “What CompStat started, year after year the men and women of the NYPD had to perfect in their everyday work. We now say proudly we are the safest big city in America. We’ve earned that title, and we earn it every day.”

De Blasio highlighted the story of rookie PO Mohamed Mozeb, a Brooklynite by way of Yemen who immigrated to the United States when he was 13 years old.

“[V]ery early on in his time here, he was inspired by the police officers in his community. And later he became an intern at the 9-0 Precinct, and the officers he met encouraged him to believe that he too could become a member of the NYPD,” the mayor related. “Mohamed says, ‘I believe in the law. I want to give back. I want to serve. I want to aim for a better tomorrow.’ Today, Mohamed is part of creating that better tomorrow as he joins, not only the 36,000 fellow officers of the NYPD, he now joins over 900 Muslim-American officers who protect our city every day.”

Bratton implored his new officers to never forget the reason why they answered the call to join the ranks of the Finest.

“Remember the oath you took and what made you take it,” he said. “Remember what carried you through the past six months. It will carry you through the work ahead—the challenges and the opportunities, the sacrifices and the triumphs—just as it has carried me to where I am.”