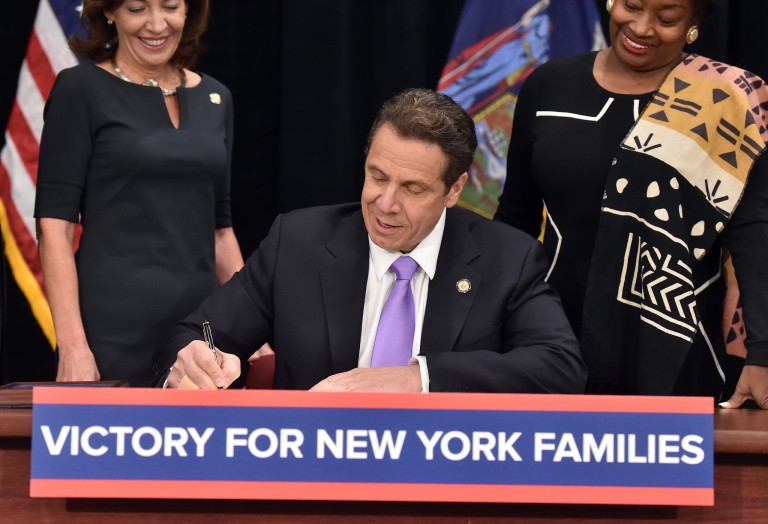 “By moving to a $15 statewide minimum wage and enacting the strongest paid family leave policy in the nation, New York is showing the way forward on economic justice,” Cuomo said. “These policies will not only lift up the current generation of low-wage workers and their families, but ensure fairness for future generations and enable them to climb the ladder of opportunity. I am proud to sign these programs into law, because they will ensure a stronger, fairer and brighter future for all New Yorkers.”

And Cuomo promised that the “historic” increase in minimum wage will ultimately reach $15 an hour for all workers in all industries across the state.

For workers in the rest of the state, the minimum wage would increase to $9.70 at the end of 2016, then another .70 each year after until reaching $12.50 on 12/31/2020 – after which will continue to increase to $15 on an indexed schedule to be set by the director of the Division of Budget in consultation with the Department of Labor.

It is estimated that more than 2.3 million people will be affected by the increases in the minimum wage.

However, not every lawmaker was a fan of the final versions of the new legislation.

“I am delighted we are now enacting a paid family leave program as part of this State Budget. While it doesn’t go as far as I would like in some ways, and I think it is being implemented much too slowly, I see it as a step in the right direction,” said State Sen. Joe Addabbo, Jr. (D-Howard Beach). “Let me be clear, I have repeatedly said that it has never been a question of IF a family leave policy would be adopted in New York State. I have said it was only a question of WHEN. But just for the record, delaying benefits for years after the legislative adoption of a paid family leave program was NOT the ‘when’ I meant.”