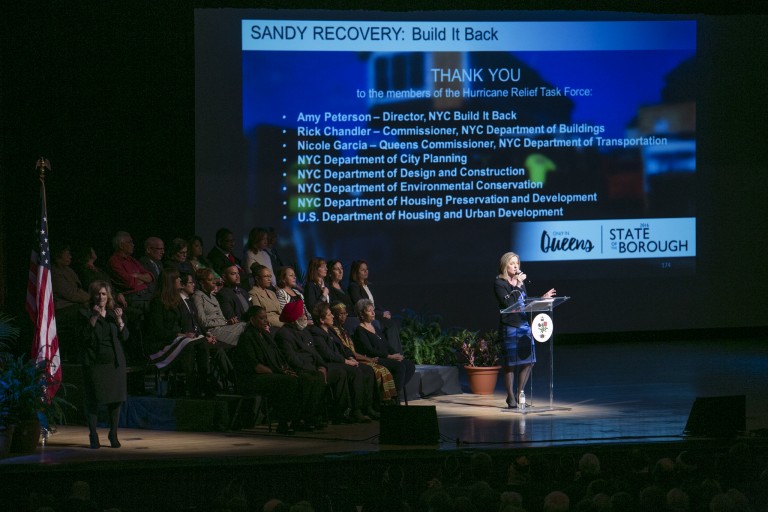 PHOTO: Borough President Melinda Katz acknowledged the “steady job” that her Hurricane Relief Task Force has done since Superstorm Sandy swept through south Queens in 2012, but added that “much work still remains.” Photo Courtesy of the Queens Borough President’s Office

Borough President Melinda Katz’s Hurricane Relief Task Force this week reviewed the progress of the work thus far in Queens by the City’s “NYC Build it Back” Program, which is dedicated to assisting homeowners, landlords, and tenants in the five boroughs whose homes and properties were damaged by Hurricane Sandy of October 2012. Over 60 percent of Queens homeowners in the Build it Back program have been served thus far, according to the Mayor’s Office of Housing Recovery Operations, with construction completed on hundreds of more homes in the past year.

“The Task Force – including HRO and Build it Back – has done a steady job in conducting comprehensive outreach to Sandy-affected communities toward the rebuilding and resiliency efforts,” said Katz. “A considerable amount of progress has taken place since Superstorm Sandy, the bulk of which since 2014 under the de Blasio administration. Much work still remains, however, and the Task Force continues to work together in close coordination with full community input. The city agencies on the Task Force have assured there will be no rest until all remaining items in the pipeline are complete.”

Queens has the largest population of Build it Back constructions and elevation/rebuilds citywide. Queens neighborhoods most served under Build it Back have been Howard Beach, Belle Harbor, Breezy Point, Far Rockaway-Bayswater, Rockaway Park, and Arverne. A total of 3,962 Queens single-family homeowners who were impacted by Hurricane Sandy are active applicants under the Build it Back program, 60 percent of whom (2,389 homeowners) have been served thus far.

Of the 2,389 Queens homeowners, 2,717 selected construction options through Build it Back; construction on 655 homes (24 percent) is now complete, up by 433 since May 2015 when Katz approved the amendment to the “Citywide Flood Resilience Text Amendment,” lifting the regulatory barriers that had previously burdened entire neighborhoods and prevented homes from fully rebuilding after Hurricane Sandy.

Of the 1,181 Queens homeowners (2,043 citywide) who selected the option to both repair and elevate their homes to comply with flood elevation standards, 28 have been completed to-date. Reimbursement checks have been issued to 2,254 Queens homeowners totaling $49.8 million (of the 5,555 totaling $109.5 million citywide) to cover the costs incurred in repairing their homes themselves.