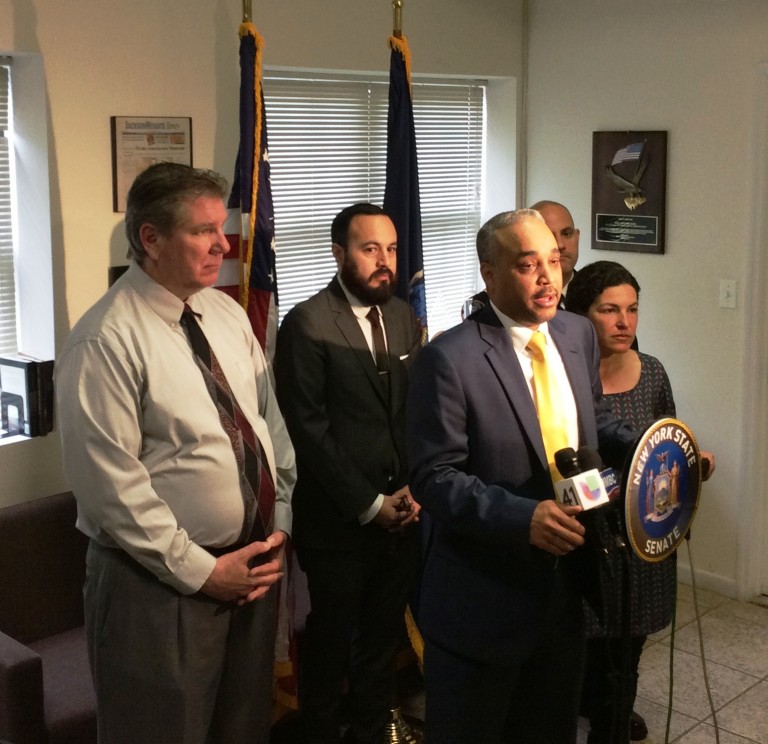 State Sen. Jose Peralta (D-East Elmhurst) and Assemblyman Michael DenDekker (D-East Elmhurst) last week introduced a bill to, as they said, crackdown on speeding drivers through proposals to improve pedestrian safety, including expanding the speed camera program to all school zones in the five boroughs.

According to published reports, since the installation of speed cameras in school zones at the beginning of 2014, 945,000 speed violation tickets were issued by September of 2015. According to the city Department of Transportation, at first, each camera issued an average of 192 violations per day. However, by September of last year, the number decreased to an average of 69 summonses per day.

“Just by looking at the number of tickets issued, we can see that drivers are speeding less and less in areas where cameras are installed,” Peralta noted.

Additionally, Peralta and DenDekker are sponsoring legislation that would remove temporal limitations of speed cameras installed to monitor school zones. Currently, the use of the speed monitoring devices in school areas is limited to periods of operational school hours, including one hour before and after the beginning and end of the school day; and during student activities, and up to 30 minutes before and 30 minutes after these activities take place.

When the state Legislature originally authorized this photo speed monitoring pilot program in 2013, it established 2018 as the end date. Under the Peralta-DenDekker proposal, the program would be made permanent.

“Clearly, installing speed cameras in school zones has been a successful initiative. To make this even more effective, we should do away with these senseless restrictions on times of operation and the number of cameras that may be in use. Accidents, especially preventable accidents, can occur at any time of the day, any day of the week,” Peralta said. “Speeding is one of the leading factors in many fatal and serious accidents, so let’s make sure we do everything we can to deter drivers from speeding, especially in school areas. This new legislation would save lives and would make streets safer for our kids and all pedestrians in general.”

The proposed legislation would also suspend the registration of a vehicle after five traffic camera violations. It establishes that if a vehicle has five violations in one year, then that vehicle’s registration will be suspended for six months. The suspension will begin five days after the notice of liability for the fifth violation has been mailed. Under current law, a moving violation cannot be issued for a traffic camera violation, only a fine can be issued to the owner of the car.

“The most important work we do as legislators is to protect the safety and well-being of our citizens. One way that we can do that is to hold reckless drivers accountable, which is what these two bills do,” DenDekker said. “Schools are safe places that attract students during all hours, including evenings and weekends. Lifting the time on speed cameras in school zones will ensure that these areas stay safe for kids all of the time, not just during school hours. The second bill suspends a car’s registration for six months if that car has five traffic camera violations in one year. This penalizes habitually dangerous drivers who create unnecessary risks in our communities. These bills help keep Queens, and all of New York, a safe place for pedestrians.”