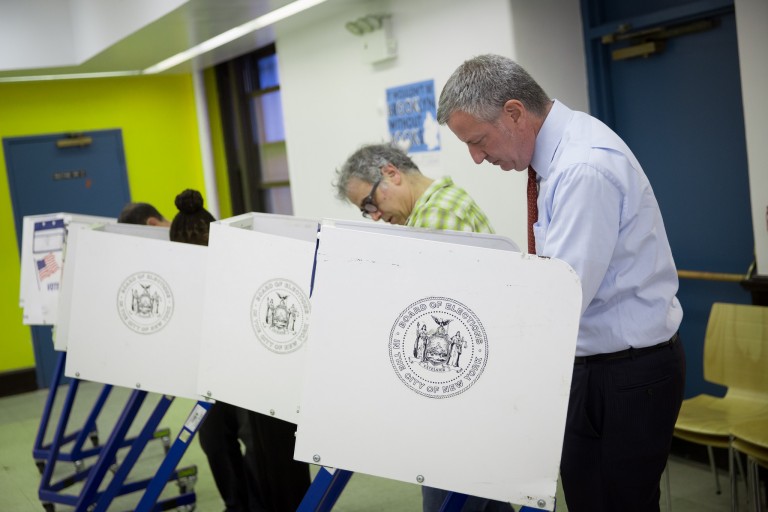 PHOTO: As a condition of receiving $20 million in incentive funding, the BOE would be required by the de Blasio administration to sign a binding agreement by June 1 regarding implementation of reforms. Courtesy of Michael Appleton/Mayoral Photography Unit

It’s the age-old adage in which political back-room deals are firmly rooted.

Mayor Bill de Blasio this week laid his own quid pro quo at the doorstep of the beleaguered Board of Elections: As a condition of receiving $20 million in incentive funding, the BOE would be required by the administration to sign a binding agreement by June 1 regarding implementation of what de Blasio characterized as “vital reforms” to the agency that took a public-relations beating last Tuesday for an abysmal Primary Day performance.

The reforms include hiring an outside operations consultant, impaneling a blue-ribbon commission to identify failures, enhancing poll worker training, and providing new email and text notifications for voters. In addition, the City will advance State legislation that transfers responsibility of day-to-day operations and personnel decisions from the BOE commissioners to executive management.

“The Board of Elections is an outdated organization in dire need of modernization – and we need to make these changes now,” de Blasio said. “We cannot allow a single voter to be disenfranchised because of the Board of Elections’ outdated operations. These common-sense reforms will bring much-needed transparency, modernize practices, and help ensure we do not experience an election day like last week’s again.”

De Blasio noted that included in the $82.2 billion Executive Budget will be $1.5 million to enable the Board to promptly commence implementation once they have signed the agreement with the City. As soon as the Board signs the agreement, the administration will recommend an additional $18.5 million at Adoption for the additional reforms, beyond the outside consultant.

In consultation with the City, the BOE would be required to take the following steps to identify and rectify systemic challenges within the organization:

Comply with the comptroller’s audit’s feasible recommendations, including a plan to implement these steps as soon as possible after the audit’s release.

Guarantee transparency in hiring by posting all job vacancies prior to hiring.

The BOE would be required to submit details for an expanded poll worker training curriculum and enhanced recruitment strategy. Once approved, the City will provide funding to:

Based on collaborative efforts with the City Council to reform the electoral process, the City would require the BOE to provide the City with a timeline and strategy to:

Independently review and confirm voter registration information with an outside consultant.

Independently review integrity of poll worker training and testing through an outside consultant.

“The Board of Elections is a patronage driven entity, funded by public dollars, that willfully flouts its responsibility to tax payers,” said Common Cause/NY Executive Director Susan Lerner. “Common Cause/NY applauds the Mayor for introducing these significant reforms to deliver an efficient system of elections that works for all New Yorkers. Voters should not have to tolerate another election day like the last, and we urge the New York City Board to work with the Mayor and implement these well-thought-out proposals.”