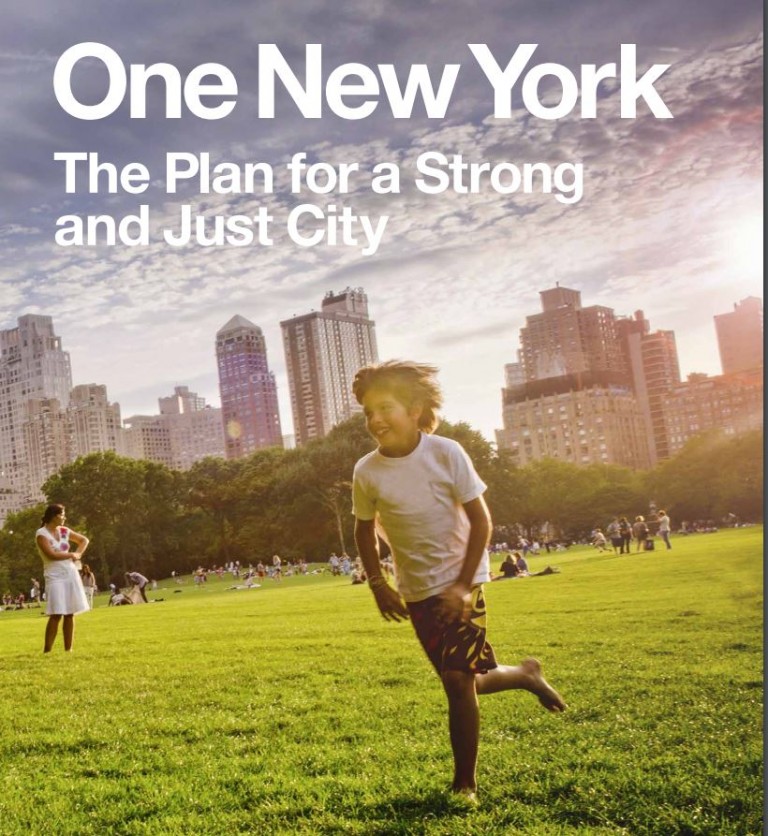 With its freshman year in the rear-view mirror, and seemingly no sophomore slump in sight, Mayor Bill de Blasio last week touted the past 12 months of One New York: The Plan for Strong and Just City – his sweeping, ambitious vision for a robust five boroughs – and forecasted a bright future for the plan, and for NYC.

Launched in April 2015, OneNYC aims to preserve and enhance the Big Apple’s role as a leading global city as it approaches its 400th anniversary in 2025.

“Environmental and economic sustainability must go hand in hand—and OneNYC is the blueprint to ensure they do,” de Blasio noted last year. “Today, we are laying out specific goals to make sure that as we build a stronger, more sustainable, and more resilient city, we are also creating a more equitable one. From our unprecedented goal of lifting 800,000 New Yorkers out of poverty, to sweeping environmental initiatives such as Zero Waste, the cleanest air of any large city, and a dramatic reduction in emissions, this is a bold and ambitious plan—and New York City requires nothing less. OneNYC builds on the strong foundation created by the Bloomberg administration, and ensures that our city can meet the challenges we face today and in the future, while inspiring others around the world to do the same.”

OneNYC is premised on four visions for the five boroughs, each including goals, specific initiatives, and detailed metrics and indicators to address the significant social, economic and environmental challenges ahead: Our Growing, Thriving City; Our Just and Equitable City; Our Sustainable City; and Our Resilient City.

Over the last year, the city has made “significant progress” toward OneNYC’s goals – over 95 percent of OneNYC’s 202 initiatives are already underway.

Broadband: Began installation of over 500 Wi-Fi kiosks in all five boroughs.

Vision 2 – Our Just and Equitable City

Early Childhood: Every 4-year-old in NYC now has access to free, full-day pre-K.

Criminal Justice: Resolved 77.5 percent of target cases through Justice Reboot that had been pending for longer than a year.

Vision Zero: 2015 was the safest year on New York City streets since record-keeping began in 1910.

Water: Conducted 500,000 water quality tests – for more than 250 contaminants including lead – from reservoirs to neighborhood streets.

Zero Waste: Signed up 39 businesses – from across all boroughs – diverting at least 50 percent of their waste from landfill and incineration by June 15, 2016 as part of Mayor’s Zero Waste Challenge.

Diverse & Inclusive Government: Women and people of color now represent the majority of administrators and officials in City government.