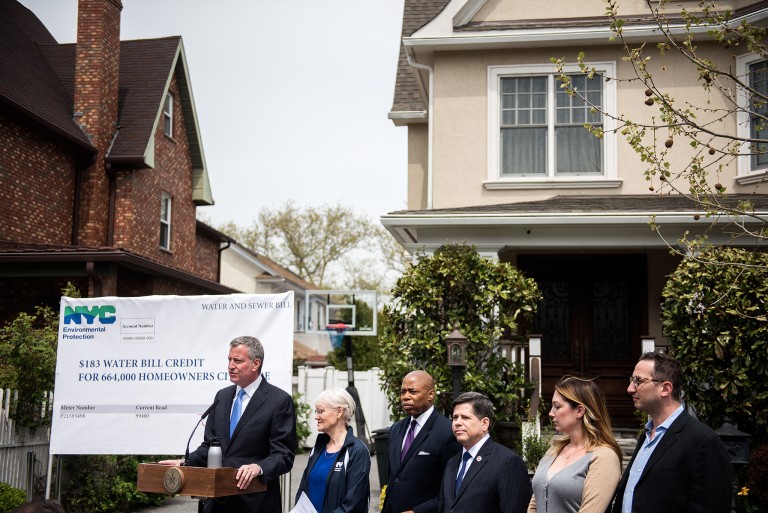 The City is looking to give money back to you.

No need to tug on your T-shirt and rub your lenses clean, or squint really hard, or just chalk it up to the dreaded typo.

Yes, you have read that correctly.

“Well, today we’re righting a wrong. Today, we’re doing something for homeowners that should have been done a long time ago, and it’s an issue I’ve worked on for years, going back to my time as Public Advocate,” de Blasio said in Brooklyn on Monday. “I’m very proud that we’re going to be able to give something back to so many hardworking homeowners all over this city who deserve a break.”

Department of Environmental Protection Commissioner Emily Lloyd, who joined de Blasio in Brooklyn on Monday, said the one-time credit results from the administration’s decision to no longer request a rental payment from the city Water Board, saving $244 million in Fiscal Year 2017 and $268 million in FY18. The mayor has the authority to request or decline to request the rental payment.

“For decades the City has been using the water bill as a cash cow for the general treasury. That’s not right. The water bill should be for one thing and one thing only – the cost of water,” de Blasio said. “Our water is safe and pure but it costs to keep it that way. This credit will provide some relief as we work to keep water and sewer bills as low as possible.”

De Blasio said the fees city residents pay will be dedicated solely to the operation, maintenance, and expansion of the water and sewer system.

“Going forward, this will provide DEP with significant additional dollars to fund the City’s indispensable water and waste-water systems, and to help us keep rates affordable,” Lloyd said. “The funds will help pay for critical capital projects, such as ongoing repairs to the Delaware Aqueduct under the Hudson River, completing work on City Water Tunnel Number Three in Brooklyn and Queens, upgrades to our waste-water treatment plants, and continued expansion of our green infrastructure program. It will also help us extend a hand to some of our more vulnerable customers.”

The $183 credit, which must be approved by the Water Board, is on top of other proposed changes, de Blasio noted, including a $250 credit per unit for multi-family residential properties that meet affordability guidelines. The $250 credit will cover 40,000 apartments or homes. Additional affordability programs are aimed at assisting the city’s most vulnerable customers, he said, including 120,000 seniors.

One to three-family households will receive the $183 automatic credit in their bills this summer, if approved by the Water Board. The decision to not take a rental payment is the first time this has occurred since the City originally leased the water and sewer systems to the Board in 1985.