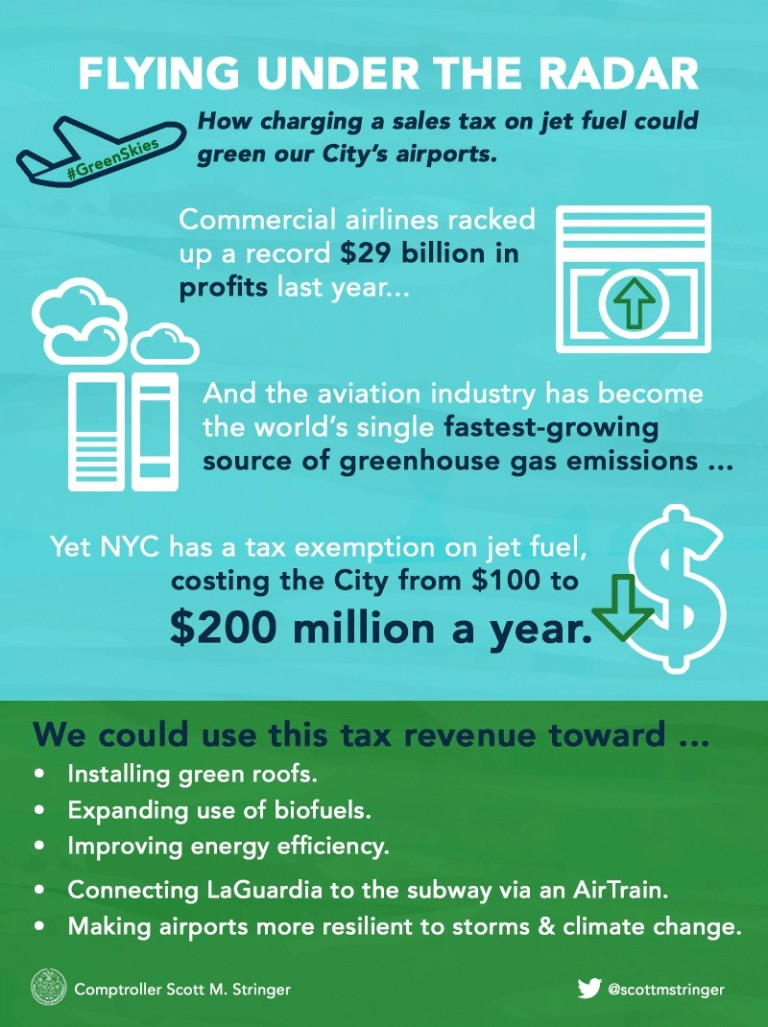 Stringer said that the lost revenue—discussed in detail in the Comptroller’s Office’s latest analysis, “Green Skies Ahead: A Plan to Modernize and Green New York City’s Airports”—could be used to modernize and green area airports, now consistently ranked among the worst in the country.

“U.S. airlines have been flying for free when it comes to paying a sales tax on jet fuel at local airports, and it’s time to make them pay their fair share,” Stringer said. “Ending this giveaway would help New York City and the Port Authority secure the funds they need to modernize and green our airports, helping cut down on soaring emissions from the aviation industry.”

U.S. airlines pay no sales tax in New York on jet fuel – even though the price of fuel has hit a 12-year low, and carriers racked up a record $29 billion in profits last year, Stringer said. In 2012, the size of the sales-tax exemption amounted to $227 million. However, the total value of the exemption will fluctuate in line with the cost of jet fuel; today the exemption would yield approximately $100 million, given the reduced cost of fuel.

Stringer noted that a tax on jet fuel would create a new funding stream to help support Gov. Andrew Cuomo’s $5 billion project to upgrade LaGuardia. The blueprint includes a proposal to connect LaGuardia to the City’s public transit network that could have a transformative impact on reducing the number of passengers arriving and leaving LaGuardia by private car. Right now, more than 80 percent of passengers use a private car or taxi to get to LaGuardia.

This “giveaway,” as Stringer calls it, is “particularly concerning” at a time when city airports rank among the worst in the nation for customer satisfaction, delays, and mass transit accessibility. One recent study ranked JFK and LaGuardia last and third-to-last, respectively, out of 30 comparable international airports in mass-transit accessibility.

Stringer is pushing for legislation granting the City the option of levying a tax on the sale of jet fuel, and proposed a menu of airport-related improvements that could be funded by such revenues, including:

Connecting LaGuardia to the subway via an AirTrain: Cuomo’s new AirTrain would connect passengers to the 7 subway line and the Long Island Rail Road at Willets Point. Since the construction of JFK’s AirTrain, ridership has grown almost 250 percent, according to Stringer.

Installing green roofs:  Airports around the world, including major terminals in Frankfurt, Chicago, and Amsterdam, are topped with green roofs which help reduce energy costs, limit run-off, and absorb carbon.

Expanding use of biofuels: To reduce environmental impacts of airports, New York should build on a 2013 pilot project which powered international flights with sustainable, low-emission biofuels, Stringer said.