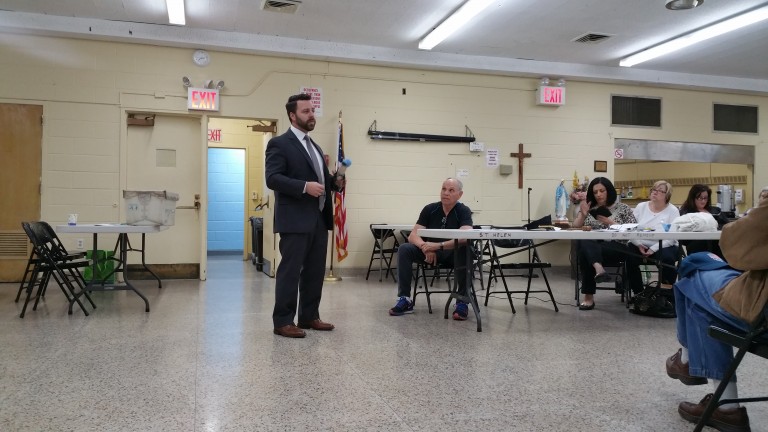 United States Postal Service officials this week brought a dismal snapshot of the borough mail-tampering situation to the monthly meeting of an area civic organization.

Postal inspectors were consistently candid with residents who gathered at St. Helen Catholic Academy on Tuesday evening for the April meeting of the Howard Beach-Lindenwood Civic and to get an update on the “mailbox fishing” issue that seems to have cast a pall of anxiety over the area.

“I’m going to be honest with you: It’s a significant problem for the Post Office right now,” said Postal Inspector Rich Gutierrez. “And I don’t know how we’re going to stop it.”

Fishing is a federal crime in which envelopes containing checks and valuable personal information are “fished out” of USPS curbside collection boxes by resourceful crooks using a makeshift rod: an adhesive attached to the end of a string or rope. The perpetrators then cash in at banks or check-cashing establishments through various deceitful methods.

Residents and authorities had hoped that the recent arrest of a Lindenwood man who allegedly had been fishing in area blue boxes for weeks would put a dent in the destruction, but no such luck.

As of Tuesday night, Gutierrez said there are “at least 40 victims and counting” in the communities of Howard Beach and Lindenwood alone.

“Some of the challenges are – the banks don’t give information freely,” he noted. “Most times we need a subpoena, and even then it could take up to 60 days.”

Gutierrez said the recent uptick in mailbox fishing “is not just a Howard Beach problem.” Corona, East Elmhurst, and the Bronx, especially, have been hit incredibly hard.

“We’re not going to arrest our way out of this,” Gutierrez said. “There are just too many.”