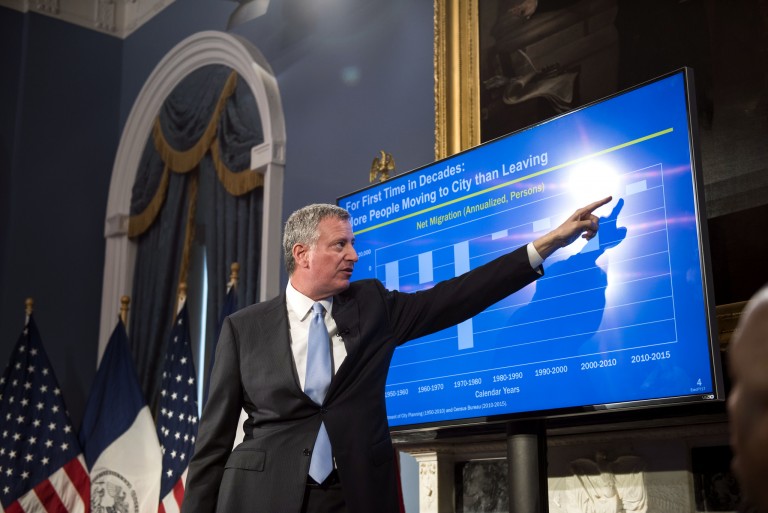 Mayor Bill de Blasio this week presented the City’s Fiscal Year 2017 Executive Budget – an $82.2 billion plan that he called “our roadmap for lifting up communities” and building on the Big Apple’s past of “producing real results” for residents.

This Executive Budget invests in public safety, public health, education, combating homelessness, vital infrastructure and transportation, and more, de Blasio noted, while also stressing saving. The fiscal plan includes $1.25 billion in new savings through FY17; coupled with the over $1 billion in savings detailed in the Preliminary Budget, the FY17 Budget reflects over $2.3 billion in savings.

De Blasio again emphasizes building on a foundation through “targeted investments” that will improve quality of life across the five boroughs, including:

$5 million in FY17 – growing to $9.8 million in FY18 – for an additional 50 more ambulance tours to ensure faster response times for high-priority, life-threatening emergencies in Queens and the Bronx.

$17 million in FY17 for the Mayor’s Equity & Excellence plan, to provide individually-tailored college plans and to ensure every high school student has access to AP courses.

$9 million in FY17 – growing to $40 million in FY19 – to ensure every elementary school is compliant with the State physical education mandate.

$66 million in FY17 – ultimately offset by $38 million in savings – for the administration’s homeless services plan.

A total of $685 million in capital funds in this budget and the upcoming Ten Year Capital Strategy to accelerate construction of the remaining shafts for the Brooklyn/Queens section of Water Tunnel No. 3, while getting the tunnel activation-ready earlier and creating a new connection to Staten Island.

$276 million in additional capital funds for reconstruction of key bridges: the Ed Koch Queensboro Bridge, the Brooklyn Bridge, and the Manhattan Bridge.

An additional $186 million to repave 1,300 lane miles in FY18, bringing FY18 in line with FY17, which will see the highest level of resurfacing in over a decade.

$122 million to fully eliminate the Water Board rental payment, providing $183 credits to 1-3 family households and $250 credits to eligible multi-family properties.

$42 million in capital funds to purchase four new ferries and reconstruct a ferry pier at the Brooklyn Navy Yard, part of the citywide ferry system.

$10 million in capital funds for land acquisition and design for two new full-service animal shelters in Queens and the Bronx.

$1.5 million for Board of Elections reforms, with the potential for up to $18.5 million more.

$12 million for FY17 to add more than 500 more Parks Department seasonal employees to provide enhanced maintenance and operations at parks, playgrounds and other facilities during peak season.

Elected officials and civic leaders had plenty to say about this Executive Budget that invests heavily in the World’s Borough, and its residents and business owners.

“Mayor de Blasio’s FY 2017 Executive Budget…includes substantial investments of new monies toward critical infrastructure projects that affect our borough,” said Borough President Melinda Katz. “I commend Mayor de Blasio for the over $1.5 billion in new capital specifically allocated toward our water arteries, bridges and sewer systems, all of which have a direct impact on Queens and our families.

“The Mayor’s investment toward the creation of a new 116th Precinct is especially welcome news,” Katz continued. “Many families in Laurelton, Rosedale, Brookville and Springfield Gardens have long identified the need for a new precinct closer to the neighborhoods it protects and serves. The size of the existing 105th Precinct, which covers nearly 13 square miles and has its stationhouse on the northern end of the vertically-long territory, has posed significant geographical challenges that make it difficult to fully serve neighborhoods in the southern half of its jurisdiction.”

Alex Blenkinsopp, director of Communications of the Woodhaven Residents’ Block Association, said it’s “encouraging” to see the administration admitting recent egregious errors and taking steps to prevent another blizzard-response debacle like that of Winter Storm Jonas in January.

“Having snow-removal equipment of various sizes makes sense, because our streets come in various sizes,” Blenkinsopp said. “It’s good that the City has decided to invest in equipment that can handle smaller streets. But we can’t forget that there were plenty of blocks in the area that, in past years, had been adequately plowed by large Sanitation vehicles. No specialized equipment was needed at the time. The problem during Jonas was that no vehicles of any size plowed these streets for days after the snow began to fall. Then, when they finally did arrive, so much snow had piled up that they couldn’t get down the streets. If they’d started earlier, instead of ignoring us for days, this wouldn’t have been a problem. I’ll never understand why other parts of the city got plowed two or three or four times before we ever saw a plow once.”