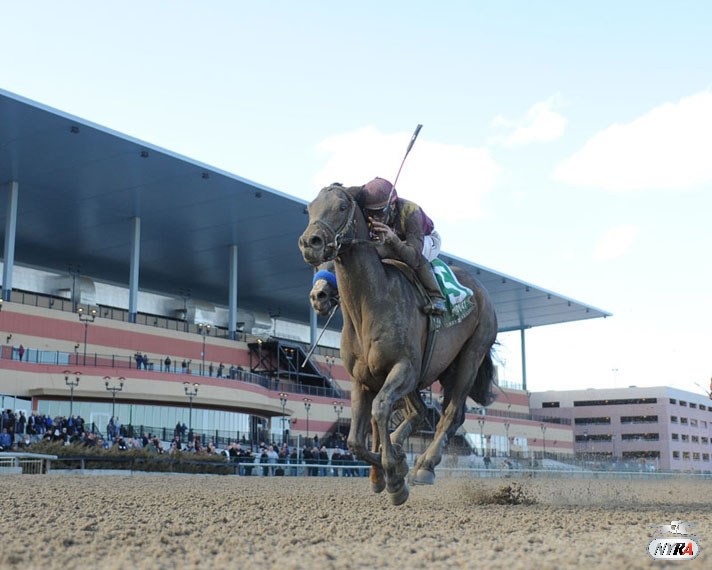 PHOTO: Assemblyman Phil Goldfeder has indicated that the NYRA restructuring plan would lead to improvements at Aqueduct Racetrack in South Ozone Park. Courtesy of Adam Coglianese/NYRA

A growing group of state legislators and the New York Racing Association Board are urging Gov. Andrew Cuomo to support a proposal that would transition NYRA to private, not-for-profit status and create a new Board of Directors that will include host community representatives from Queens and other respective track communities.

Assemblyman Phil Goldfeder (D-Howard Beach) on Monday announced that he has joined fellow elected officials who represent other so-called racetrack communities in sending a letter to Cuomo, calling on him to get behind the new NYRA restructuring plan – which the NYRA Board voted in favor of earlier this month.

In the missive, Goldfeder presented the outline of a new governing structure for NYRA under a proposed return to private, not-for-profit status: a fresh 15-member Board of Directors that will include representatives from the state Thoroughbred Horsemen’s Association, state Breeders Association, and an equine veterinarian. The Board will also include the NYRA CEO, and three at-large members nominated by the Board.

For Goldfeder, the most noteworthy elements of the new Board would be the two host community representatives from Ozone Park, Elmont, and Saratoga Springs – homes of the state’s three premier racetracks: Aqueduct, Belmont Park, and Saratoga, respectively. Under the plan, the six members would be appointed by the mayor or supervisor of the host community.

The proposal also requests the creation of Community Advisory Boards for each host community. NYRA officials would regularly meet with the CABs to review and take comments on policies and programs impacting the neighborhoods.

“NYRA has really hit its stride in bringing new levels of popularity and profitability to horse racing across New York State,” said Goldfeder, a member of the Assembly Committee on Racing and Wagering. “Our proposed restructuring plan will help put the state’s racetracks on an equal footing with programs across the country and give them a real run for their money. Most importantly, it will give a voice to communities around Aqueduct Racetrack and ensure the continued success of this great sports facility.”

If approved by the Legislature and Cuomo, the plan would return NYRA to private status for the first time since it was placed under state control in 2012. In the years since, the organization has experience consistent significant growth, aided in part by the surge in popularity surrounding the 2015 Triple Crown winner American Pharoah, who drew record crowds to Belmont Park and Saratoga. According to a media release following the Board meeting, NYRA enjoyed back-to-back profitable years in 2014-15, with $1.7 million in profits in 2014 and $3.5 million in 2015, a first since it filed for bankruptcy in 2006.

Aqueduct has had its share of recent success. NYRA reported that during the 2016 winter meet, the South Ozone Park track’s average daily handle was up $831,590; while its total handle had increased $54.5 million year-over-year.

And following a recent agreement between Genting Group, the parent company of Resorts World New York, which is located on Aqueduct grounds, and Nassau County Off-Track Betting, the casino is set to get 1,000 new video lottery terminals, bringing the facility’s gaming capacity to approximately 6,000 VLTs.