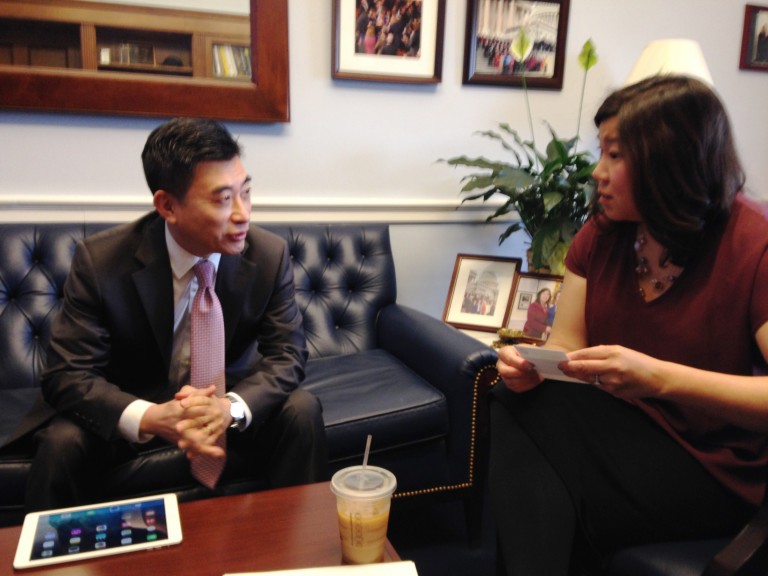 It seems that at least one borough elected official is willing to go anywhere – another galaxy? – for a solution to Queens’ persistent airplane noise issue.

U.S. Rep. Grace Meng (D-Flushing) last Thursday met with the National Aeronautics and Space Administration to discuss ways to combat that familiar roar over parts of the World’s Borough.

NASA, Meng said, is working on technology to mitigate aircraft noise, and is seeking funding to test and further develop these initiatives so that they can be made available for commercial use.

Meng sat down in her Washington, D.C. office with Dr. Jaiwon Shin, NASA associate administrator for the Aeronautics Research Mission Directorate. Shin works at NASA Headquarters in Washington and manages the agency’s aeronautics research portfolio, and guides its strategic direction. The portfolio includes research in the fundamental aeronautics of flight, aviation safety, and the nation’s airspace system.

Technology that NASA is pursuing, Meng noted, includes altering the shape of aircraft, and upgrading engines that have lower noise output. NASA is also examining methods of flight that would limit the amount of time that an airplane descends – a move that would reduce the number of homes that aircraft fly over at low altitudes. The agency has already begun testing this method of descent.

“I’ll talk to anybody who can play a role in mitigating airplane noise over our borough,” said Meng. “We must exhaust all traditional means in our fight against noise but we must also think out of the box and that is why I asked NASA to meet with me about the problem. Although most of the potential technology is years away, it is never too early to pursue it. Whether it’s NASA, increasing pressure on the FAA or my efforts to have the EPA take over mitigation efforts, we must continue to explore all possibilities to reduce excessive aircraft noise from the skies of Queens.”