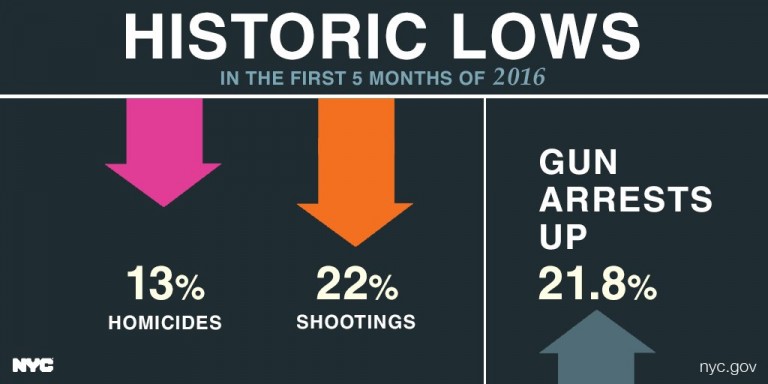 While tabloid front pages may depict the Big Apple as rotten to its blood-and-bullets core, facts and figures seem to be painting a starkly different picture.

In 2016, the five boroughs collectively experienced the safest start to a year in modern New York City history, according to the City Police Department’s latest available statistics.

“There is a perception that crime and violence are on the rise in New York. That perception defies reality. We are in the midst of experiencing the safest start to any year I have ever seen—with nearly one hundred fewer shootings and nineteen fewer murders through the first five months of the year,” Police Commissioner Bill Bratton said last Thursday during a crime briefing at 1 Police Plaza. “I am extremely proud of the of the precision put forth by the members of this department. From intelligent observations and arrests by officers on patrol, to the many gang takedowns, to the cases we have built with prosecutors, we continue our focus on those committing the most egregious crimes as we enter the summer, ensuring New York City remains the safest big city in our nation.”

Bratton noted that a driving force behind the sustained decrease in violence are strategic takedowns in areas experiencing violence. These long-term investigations have yielded upwards of 350 arrests, including some of the city’s most violent and prolific criminals. Additionally, there have been nearly 1,550 gun arrests in 2016 thus far, representing an increase of more than 20 percent compared with the same period in 2015.

Overall crime in May 2016 declined 6 percent in the city, compared with the same period last year – including seven fewer murders and 50 fewer shootings, making this May among the safest in the entire CompStat era.

“June is National Gun Violence Awareness Month, and we’re proud to head into the month with an extraordinary drop in gun violence in our city,” said Mayor Bill de Blasio. “The first five months of this year saw a 22-percent drop in shootings—an extraordinary low that goes hand in hand with the NYPD’s tremendous increase in gun arrests. Today’s numbers make clear: precision policing is working. I want to thank Commissioner Bratton and all the women and men of the NYPD who spend each day working tirelessly to keep our city the safest big city in America.”