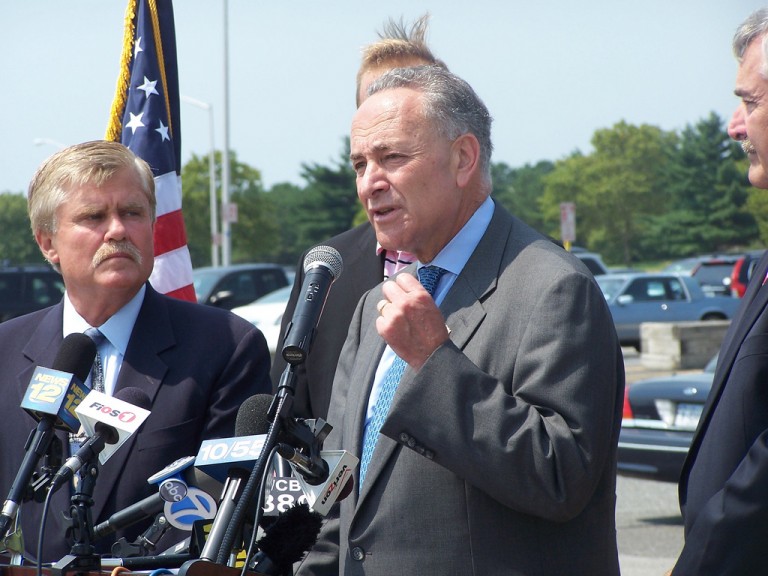 PHOTO: Sen. Schumer has reached out to the Port Authority, urging the agency to complete airport noise impact studies and begin taking mitigation steps as quickly as possible. Courtesy of Sen. Schumer’s Office

U.S. Sen. Charles Schumer (D-N.Y.) has reached out to the Port Authority of New York and New Jersey to urge the agency to complete its Part 150 Airport Noise Compatibility Planning studies as quickly and thoroughly as possible, so that it can begin taking noise mitigation steps and gradually improve the quality of life of the communities surrounding John F. Kennedy International and LaGuardia airports.

“As you know, each day thousands of New Yorkers are adversely impacted by airplane noise. These communities need relief,” Schumer wrote in a letter to Port Authority Executive Director Patrick Foye.

According to the FAA, the Part 150 study is part of a program that provides a structured approach for airport operators, airlines, pilots, neighboring communities and the FAA to work together to reduce the number of people who live in noise-impacted areas – including south Queens communities Howard Beach, Hamilton Beach, and Lindenwood The study requires that members of the public have an opportunity for active and direct participation in the process through public meetings and hearings.

Through the Part 150 study, airport operators may consider different ways to reduce noise, including changing operational procedures (like take-offs and landings) or routing flight paths over less noise sensitive areas or provide sound insulation for homes, schools and other buildings near the airport, Schumer said.

“While there is no silver bullet when it comes to addressing noise pollution around airports, the completion of the Part 150 studies can help play an important role in providing relief to communities,” Schumer said. “These important studies will finally evaluate the best ways to address noise impacts in communities surrounding JFK and LaGuardia airports. The Port Authority should complete these studies as quickly as they can so that our long sought relief of airplane noise is provided as soon as possible.”

Port Authority representatives did not return messages seeking comment on the letter to Foye and Schumer’s request.

Over the last several years, New York’s senators have tackled the issue of airplane noise in area neighborhoods. In August 2015, Schumer and U.S. Sen. Kirsten Gillbrand (D-N.Y.) announced $3.1 million in federal Department of Transportation funding for Part 150. They also successfully pushed for a hotline phone number for airplane noise complaints. And, after Schumer and Gillibrand’s urging, the State directed the Port Authority to hold regular roundtable discussions in collaboration with FAA representatives and other affected parties regarding issues at JFK and LaGuardia.

Additonally, last month, U.S. Rep. Grace Meng (D-Flushing) met with the National Aeronautics and Space Administration to discuss ways to combat the familiar roar of aircraft over parts of the World’s Borough.