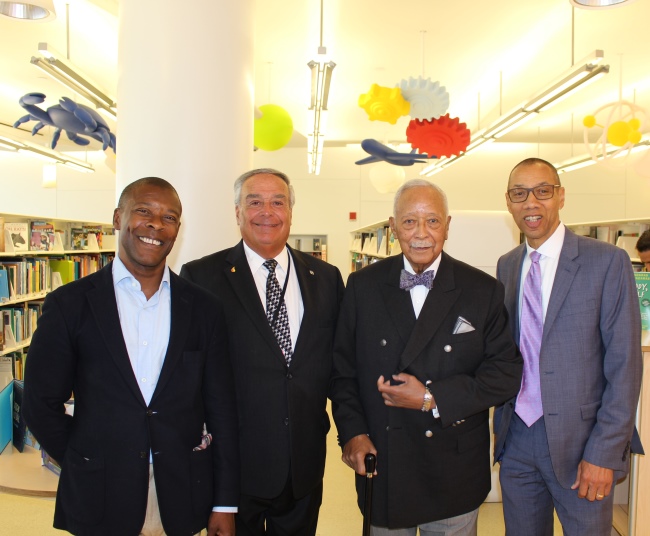 Starting next month, computer science activities will be available for kids in grades 4 through 8 at 26 Library locations, with more pledged for this fall. The Queens system is the first library in the five boroughs to partner with Google for the free program.

Library President and CEO Dennis Walcott made the announcement on Tuesday at the Children’s Library Discovery Center in Jamaica, adjacent to the Central Library on Merrick Boulevard. He was joined by former Mayor David Dinkins; William Floyd, Google’s head of External Affairs for New York and New Jersey; Hon. Augustus Agate, Library trustee; and plenty of eager children.

“You will be doing things we, and even you, have not dreamed possible,” Walcott told the young students.

Walcott went on to say that the Library was helping the kids of today become the CS programmers of tomorrow. He also spoke about QL’s first partnership with Google, in 2013, when they donated 5,000 Nexus tablets for use by Library customers after Superstorm Sandy. The tablets are still in circulation today.

According to Google, CS First “is intended to empower all students to create with technology through free computer science clubs.” The goals are to increase confidence when using computers, to instill courage to try new things, to grow perseverance when tackling difficult problems, and to demonstrate the positive impact that computer science has on careers and communities. The curriculum follows seven age-appropriate topics, including art, music and sound and game design.

“It only takes a moment to change a child’s trajectory,” a CS First introductory video emphasized to all in attendance.

Queens Library is enhancing the program with teen apprentices, Walcott noted. Through the nonprofit ExpandED Schools, 20 high school students will be recruited to the apprenticeship, and will receive high school credit for it. After receiving training in teaching coding and computer science to children, they will assist children in the Google CS First program over the summer and after school in the fall.