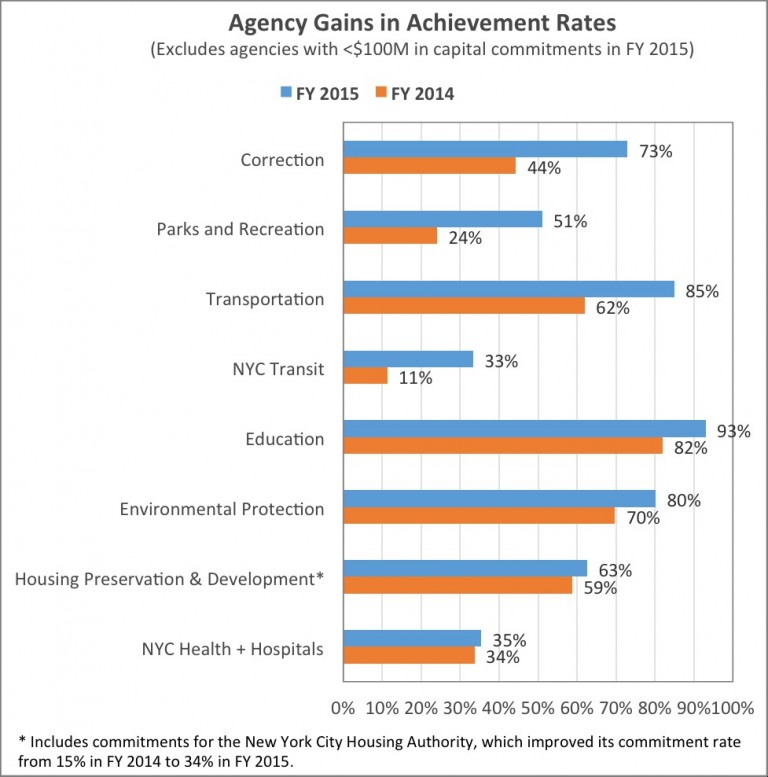 A capital commitment is a measure of the work that was started in any given fiscal year which occurs when a contract is registered and work on a project can begin.

In Fiscal Year 2015, the City committed to $9.3 billion in capital projects, Stringer said, enabling new construction and capital improvements to proceed on bridges, roads, parks, schools, and other infrastructure across the five boroughs.

That’s a sign of significant progress, because in FY 2014, 52 percent of authorized plan commitments were achieved, with wide disparities between agencies and project types, making it the second-lowest rate achieved in the last 10 years, according to Stringer’s report “A Closer Look: FY 2014 Actual to Planned Capital Commitments.”

As the analysis noted, there are many reasons why an agency may fall short of its authorized commitment plan. Capital projects vary in size and scope and often require unique design, planning and contracting processes. Projects can span several fiscal years and may have to change in scope and adapt to unforeseen field conditions. As such, the nature and complexity of capital project planning often causes shifting timelines and modified cost estimates.
From FY 2014 to FY 2015, more than two-thirds of the City’s 25 agencies with capital budgets improved their rates of capital commitments. The gains, the comptroller said, resulted from different factors: some agencies lowered their planned commitments; others increased their actual commitments; and some did both.

“City agencies were more effective at getting capital contracts registered and shovels in the ground last year, which means new school spaces, improved parks, and repaved streets,” Stringer said. “But even as more capital projects are being started, there’s still much more work to be done. City agencies should seek to begin all the projects they’ve planned so much-needed construction and repairs can proceed without delay.”