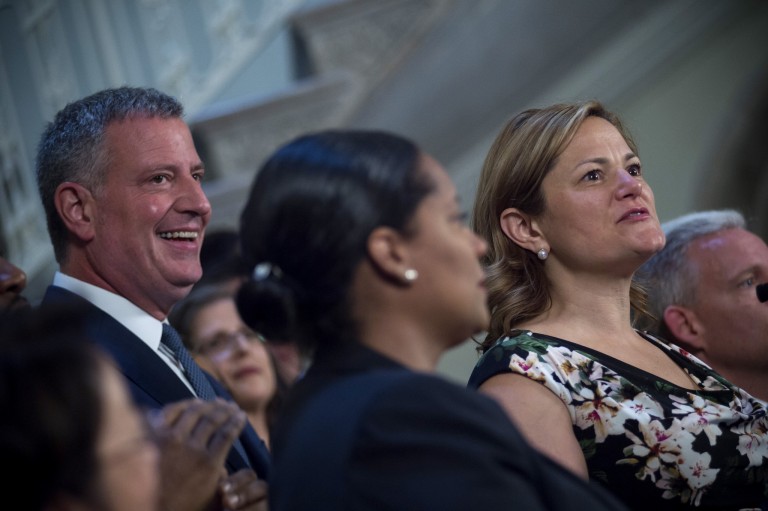 PHOTO: Mayor de Blasio, Council Speaker Mark-Viverito, and Council members last week were all smiles as they announced that an agreement on the Fiscal Year 2017 Budget had been reached. Courtesy of Ed Reed/Mayoral Photography Office

More budget bliss at City Hall as Mayor Bill de Blasio and the City Council last week announced that they have reached an early agreement on a balanced Fiscal Year 2017 financial plan, marking the earliest handshake between the two branches in 15 years, according to the administration.

The $82.1 billion budget, according to the mayor and the Council, makes targeted investments in cultural organizations and libraries, youth workforce development and public safety, while strengthening the City’s long-term fiscal health through the bolstering of unprecedented reserve funds and an even larger Citywide Savings Program.

“This budget is not only on time – it’s the earliest agreement since 2001, because the administration and Council worked together to produce tangible, timely results for New Yorkers,” said de Blasio, perhaps taking a veiled shot at the previous administration, which was known for its annual budget tug-of-war, replete with threats to shutter Fire companies and cripple senior services. “We’ll grow to 60,000 slots in our Summer Youth Employment Program, continue six-day library service, invest in our cultural institutions, provide our district attorneys with the funds they need to continue combating crime and addressing heroin and prescription drug use, all while protecting the City’s fiscal health. Thank you to Speaker Mark-Viverito and all of her colleagues in the Council for their partnership as we reached this agreement.”

“Mayor de Blasio and the City Council have demonstrated a deep understanding of the fundamental good public libraries offer the community,” said Queens Library President and CEO Dennis Walcott. “By insuring six days of service for the future, Queens Library can offer even more residents the tools for success. Thanks to Mayor de Blasio, Speaker Mark-Viverito, Finance Chair Ferreras-Copeland, Majority Leader Van Bramer, Libraries Chair King and the entire City Council for their leadership and for investing in New Yorkers by investing in libraries.”

Mark-Viverito added, “With this budget agreement, this City Council has proven once again to be a champion for all New Yorkers in all five boroughs. Whether you are young person who will gain their first paid work experience through the expanded Summer and Year Round Youth Employment Programs an undocumented New Yorker who will have access to free, comprehensive legal assistance and adult literacy services, or a struggling parent who will have an easier time putting food on the table with help from the Emergency Food Assistance Program, this is a budget for everyone. I thank Mayor de Blasio, Finance Committee Chair Julissa Ferreras-Copeland, my Council colleagues, and all the New Yorkers who made this equitable, responsible budget possible.”