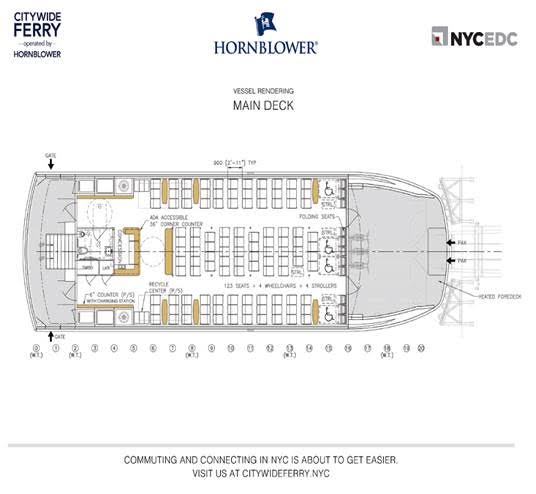 PHOTO: Each boat can carry up to 149 passengers, and features space for bikes, strollers and wheelchairs. Courtesy of NYCEDC

The de Blasio administration recently released new renderings of the Citywide Ferry vessels that will be hitting New York’s waterways when Phase I of the service sets sail next summer.

Nineteen boats will be operating at 21 landings across the five boroughs. Mayor Bill de Blasio boasted about some of the specs and features for each vessel, which include:

“The overall concept of these new vessels reflects our desire to deliver a system that builds on our strong record of environmental efficiency, sustainability and resiliency,” said Cameron Clark, vice president and general manager of Hornblower, the California-based operator of the CFS.

De Blasio announced in March that the seaborne service is on track for a 2017 start date. The Phase I Rockaway, Astoria, and south Brooklyn routes will be ready for the first 2017 voyages. When fully operational by 2018, the Citywide Ferry Service will carry an estimated 4.6 million trips per year across six routes.

“The greatest city in the world deserves the greatest ferry system in the world. That’s exactly what New Yorkers are getting with these modern, efficient boats that come with Wi-Fi, charging stations, and plenty of space to move around comfortably,” the mayor noted. “Most importantly, when we launch Citywide Ferry next summer we will be connecting New Yorkers in transit-starved neighborhoods with good jobs and opportunities all over the city.”

The plan still is for the ferry to be pegged to the price of a MetroCard, and launch at $2.75 per trip. The project is expected to cost approximately $325 million. The City has said that it is investing $55 million in infrastructure upgrades, including building 10 new ferry landings and rehabilitating six others; and that it is also providing $30 million in operating support per year, over a period of six years.

“The addition of citywide ferry service will give locals and visitors more reasons to explore the City’s vibrant and multicultural neighborhoods throughout the five boroughs. We welcome the new service and look forward to providing our visitors even better access to all of the excitement New York City has to offer,” said Fred Dixon, president and CEO of NYC & Company, the City’s official destination marketing organization.

“Ferries have been an underused part of our transit system for nearly a century. Having new ferries to support the mayor’s water transport plan will go a long way toward correcting that imbalance,” added Sam Schwartz, president and CEO of Sam Schwartz Engineering and former City Department of Transportation commissioner.

The administration also recently announced that five New Yorkers who take a two-minute survey about Citywide Ferry through the website will automatically be entered to win one of five annual Citywide Ferry passes once service commences next year. Winners of the annual passes will be announced as Citywide Ferry gets closer to launch with one entry per person. For more information, visit CitywideFerry.NYC.