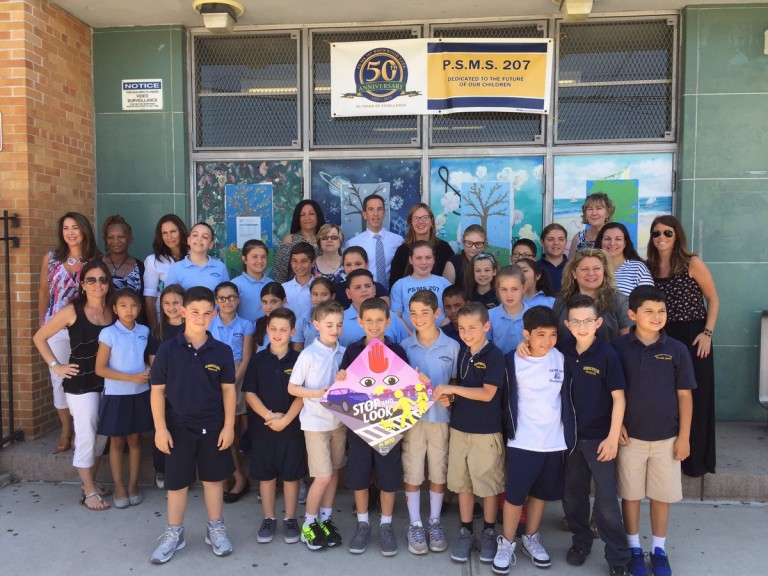 Fourth-grade students at PS 207 in Howard Beach on Tuesday completed their year-long lesson in civic engagement when they unveiled traffic safety signs they crafted as part of a City Department of Transportation program to design a custom sign to be installed outside the Rockwood Park school.

The class was picked by Assemblyman Phil Goldfeder (D-Howard Beach) in February to participate in the City’s “We’re Walking Here NYC” public awareness campaign, which brings DOT traffic safety staff and artists to schools to work with students on an original sign.

Goldfeder nominated the students for the project after the then-third graders sent a petition to his office last June calling for traffic safety upgrades around the school. At the time, students gathered more than 500 signatures from area residents calling for the installation of “State Law: Yield to Pedestrians” signs at 159th and 160th avenues, and 88th and 89th streets. While DOT informed Goldfeder’s office that it could not install the requested signs, the agency did offer to consider the school for “We’re Walking Here NYC.”

“What better way for our children to learn about traffic safety than to design their own street sign,” Goldfeder said earlier this year. “These fourth graders at PS 207 have already proven their passion for making the community a better, safer place for all our families, so it’s a well-deserved honor for them to be included in this program.”

On Tuesday, Goldfeder beamed with pride for the unveiling.

“The students at PS 207 deserve all the credit for these new signs,” he said. “Their efforts to engage my office and the city on this public safety campaign serves as an example of how the community can work together to ensure a better quality of life for all families. I was honored to be called on to serve by these future leaders and I encourage them to stay involved in the years ahead.”

Principal Eileen Davies added, “We are delighted for the children to see their voices were heard.  The students will be able to be a part of something that will touch the lives of everyone in our community.  These signs will be representing their voices in a very powerful way.  What a great way to show the children that they are important and they can speak up and see results.”

PS 207 is the second area school nominated by Goldfeder for the DOT program; PS 232 in Lindenwood unveiled its own student-designed sign in 2014.