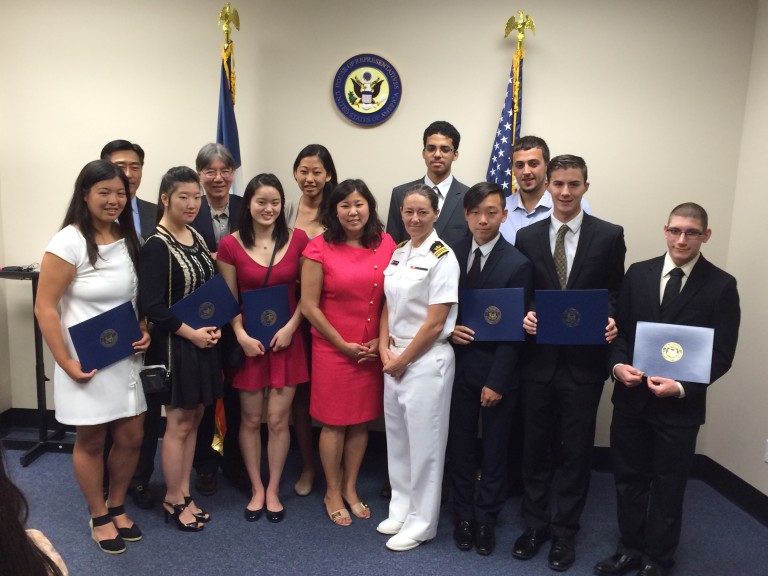 A ninth student has also been accepted to the Air Force Academy Prep School.

“It is an honor to congratulate these outstanding young men and women,” said Meng, who hosted a reception Monday afternoon for the students and their families at her Flushing office, and presented each student with a Certificate of Congressional Recognition. “They are our next generation of leaders and I thank each of them for dedicating themselves to our country. They’ve made me proud and I know they’ll make our nation proud as well. I wish them all the best.”

The elite service academies prepare college-aged Americans to be officers of the U.S. Uniformed Services. After four years of study, service academy graduates become commissioned as officers in the active or reserve components of the U.S. military or merchant marine for a minimum of five years.

Students seeking to attend the service academies must be nominated by their member of Congress. The institutions evaluate all the nominations received by members of Congress from across the country, and then decide which candidates to accept.

Nominees must meet the highly competitive educational, physical, and extracurricular standards set by the individual academies. Meng is assisted in the nomination process by her Academy Review Board, a panel of civic leaders.

This is the third round of students that Meng, who took office in 2013, has nominated to the academies. The nine students selected this year were chosen from the 23 that Meng nominated.

Since she was sworn into Congress, Meng has made 83 nominations, and a total of 19 students have been accepted.

Meng said plans to again sponsor “U.S. Service Academy Information Night” for borough students who are interested in applying to the service academies.