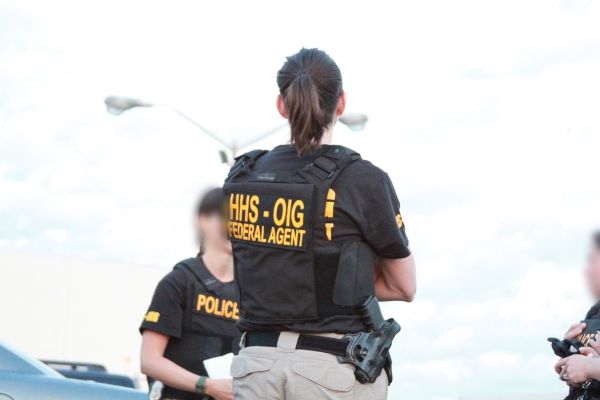 PHOTO: Javed’s arrest was part of the largest national Medicare fraud takedown in history. Courtesy of the Dept. of Health and Human Services Office of the Inspector General

The owner and operator of several pharmacies across Queens and Brooklyn has been charged with participating in a healthcare fraud scheme that used the establishments to submit millions of dollars in fraudulent claims to Medicaid and Medicare, according to the U.S. Attorney for the Southern District of New York.

Sajid Javed’s arrest last week was part of what the Justice Department described as an “unprecedented” nationwide sweep resulting in criminal and civil charges against 301 people, including 61 doctors, nurses, or other licensed medical professionals, for their alleged participation in fraud schemes involving approximately $900 million in false billings.

Last Wednesday’s coordinated takedown is the largest in the history of the Medicare Fraud Strike Force, the DOJ said, both in terms of the number of defendants charged and loss amount.

The Strike Force is part of the Health Care Fraud Prevention & Enforcement Action Team, a joint initiative announced in May 2009 between the DOJ and the U.S. Department of Health and Human Services to focus their efforts to prevent and deter fraud and enforce current anti-fraud laws around the country.

“As alleged, Sajid Javed induced others to forego their prescription medications for a kickback, and then fraudulently billed Medicare and Medicaid more than $8 million for the drugs that were never actually dispensed,” said U.S. Attorney Preet Bharara. “This alleged scheme not only put patients at risk, it also contributed to the multibillion-dollar pillaging of federally funded public health care subsidies.”

While owning and operating nine different pharmacies Queens and Brooklyn, according to the complaint, Javed, 45, conducted a multimillion-dollar scheme to defraud Medicare and Medicaid programs by seeking reimbursement for prescription drugs that were not distributed to customers. From January 2013 through December 2014, Javed allegedly obtained more than $8.5 million in reimbursements from Medicare and Medicaid for prescription drugs that his pharmacies never actually dispensed. He defrauded Medicare and Medicaid into providing him with the reimbursements by obtaining prescriptions from other people, who were willing to forego delivery of the medications in exchange for a share of the reimbursed proceeds, in the form of kickbacks, the complaint alleges. Javed allegedly offered to pay, and did actually pay, kickbacks as part of the scheme.

According to the U.S. Attorney’s Office, including Wednesday’s enforcement actions, nearly 1,200 individuals have been charged in national takedown operations, which have involved more than $3.4 billion in fraudulent billings.

“These alleged criminals arrested around the country today and here in New York City are stealing money meant to help people seeking medical assistance.  It’s not a visible theft in public view, but the victims of the crime suffer greatly when they can’t get the assistance they need,” added FBI Assistant Director-in-Charge Diego Rodriguez. “We are asking anyone who sees this sort of crime and fraud taking place to be vigilant, and report it to us at 1-800-CALL-FBI.”