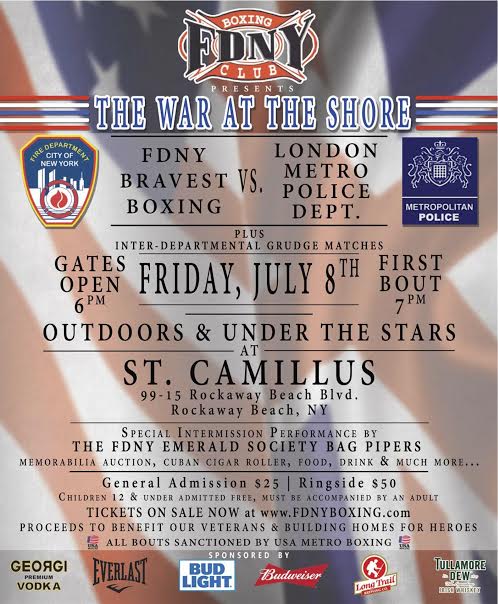 The siren call of the sweet science beckons fight fans to Rockaway Beach next Friday, July 8, for The War at the Shore: FDNY Bravest Boxing vs. the London Metropolitan Police Boxing Team.

Civil servants from opposite sides of the pond matching punch-for-punch underneath the stars at St. Camillus on Rockaway Beach Boulevard – for a great cause, of course.

Proceeds will go to veterans and Building Homes for Heroes, a charity that builds or modifies homes, and gifts them, mortgage-free, to veterans and their families across the country.

“We support military charities and Building Homes for Heroes because we believe our wounded veterans deserve to be taken care of,” said long-time Bravest Boxing President Bobby McGuire. “We also have a special kinship to the military after the terrorist attack on 9/11. They are the ones who went out and got those responsible. God bless them all and a special thank-you to Seal Team 6.”

Vaughan was wounded in Afghanistan in September 2011 when the vehicle he was travelling in struck an 80-pound pressure plate (improvised explosive device) while he was carrying out combat operations in the Southern Helmand province. Five marines were severely injured in the attack.

Vaughan was transported by medevac to Bagram Airfield for immediate treatment beforebeing transferred to Germany, and then to Walter Reed National Military Medical Center in Bethesda, Md. He spent 15 months at Walter Reed.

Vaughan sustained serious injuries to both legs, and despite several surgeries, doctors were unable to save his left limb, which was amputated below the knee. He also suffered plantar fasciitis and nerve damage to his right foot, left shoulder tendonitis, degenerative joint disease to his lower back, tinnitus, a traumatic brain injury, and a left hand fracture. His right leg had to be reconstructed with rods and screws.

Vaughan resides in North Merrick. Building Homes for Heroes will set him up with new digs in the Merrick, Seaford, Wantagh, North Massapequa area.

McGuire, a firefighter for 22 years who retired out of Ladder Co. 173 on Cross Bay Boulevard in Howard Beach, said his team of pugilists believes in raising money for a good cause through spirited competition.

“We fight the NYPD, the Garda Siochana [police force of Ireland] and London Metro Police each year,” he noted. “All the events are exciting, but there is nothing better than beating our brothers in blue – the NYPD. We once fought them in Keyspan Park in front of a sold-out crowd and beat them 12-2. That was a special night.”

Friday, July 8, promises to be special one, too.