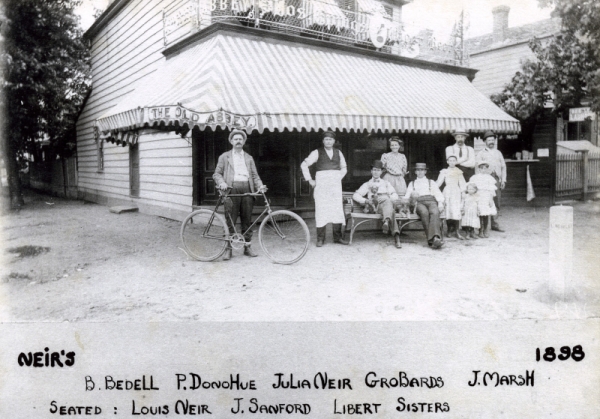 The beloved watering hole at the corner of 78th Street and 88th Avenue has long been a landmark in the hearts of its loyal patrons – generations of Woodhaven families – who have cherished its role as destination, reliable shelter, and faithful friend, in this tight-knit Queens community.

“We’re greatly disappointed in their decision,” said Ed Wendell, president of the Woodhaven Cultural and Historical Society. “The Union Course racetrack, which opened in the 1820s, was one of the driving forces in the development of Woodhaven, Ozone Park, and Cypress Hills. The railroad was built to accommodate it. An entire community was built around it. The track has been gone for over 130 years, and Neir’s Tavern is the last physical remnant of that era. It didn’t just sit along the outskirts, it sat at the entrance.

“However, we are optimistic that it will be landmarked one day for one simple reason: It has been resilient, outlasting many things that have destroyed businesses,” Wendell continued. “It survived the Great Depression and Prohibition. It has survived many wars.”

The Commission determined that the bar that dates back to the 19th Century “does not rise to the level of significance to warrant landmark status.”

“Neir’s Tavern is a staple of our community that helped build the history of Woodhaven and shape the neighborhood into what it is today,” said State Sen. Joe Addabbo, Jr. (D-Howard Beach). “While the rest of the city is busy expanding and developing, it is important that we remember the structures that tell the story of Queens, and it is our responsibility to protect and preserve them. Landmarking the more than 180-year-old tavern would ensure the building and its surroundings will remain unchanged and safe from developers for years to come. Neir’s is already a landmark as far as the people of Queens, especially Woodhaven, are concerned, but it deserves the respect of being officially named as one by the City. I urge the Landmarks Preservation Commission to rethink its decision and to do what is right by doing its part to help protect Neir’s Tavern.”

The Woodhaven Residents’ Block Association added, “We stand 100 percent with Neir’s Tavern in its quest to be landmarked. It is New York City’s oldest bar to operate continuously from the same location. Anyone who visits can just feel how much history has occurred there. To this day, it remains a major part of the fabric of Woodhaven. We hope the Landmarks Preservation Commission reconsiders Neir’s and gets it right the next time around by naming the tavern a landmark.”

Wendell said he’s confident that the treasure trove of Big Apple history that sits on the corner of 78th Street and 88th Avenue will eventually win.

“Regardless of the Commission’s recent decision, Neir’s will be around for many more years to come. The same cannot be said for the people on the Commission. Those positions are temporary and in a few years there will be new people in office and new appointments to the board,” he noted. “In other words, this is a temporary setback and we will not give up trying.”