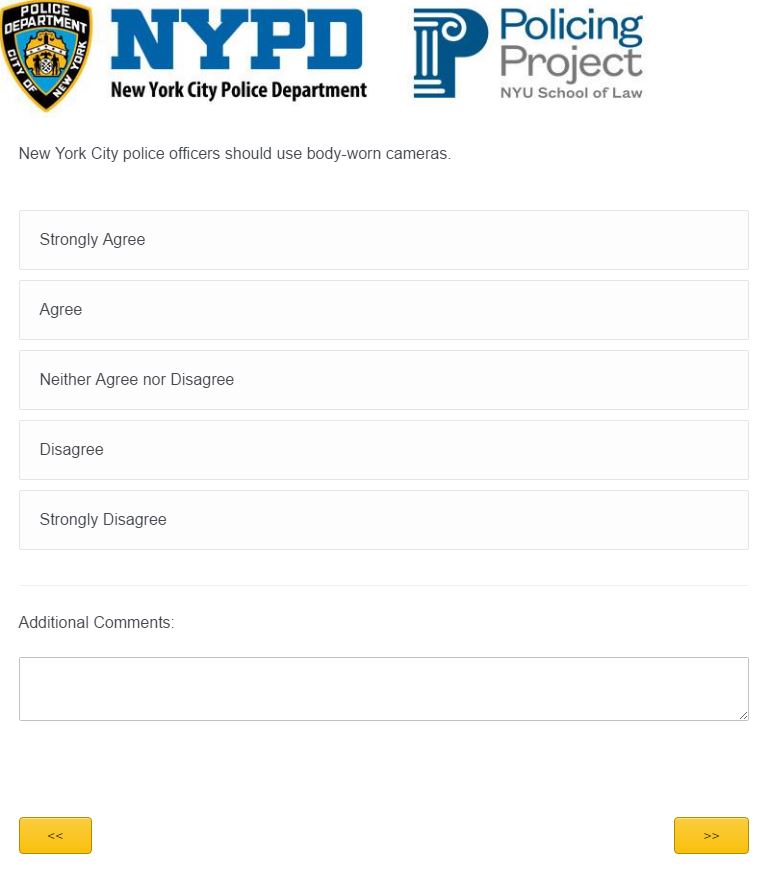 PHOTO: A page from the body-worn camera policy questionnaire. Courtesy of NYPD

As part of a pilot program, the City Police Department later this year plans to assign approximately 1,000 body-worn cameras to officers in 20 commands throughout the five boroughs.

The NYPD has indicated that it wants input on its body camera policy from the communities it patrols. So, in partnership with the Policing Project at NYU School of Law, the department is seeking to cull perspectives of people who live, work, or go to school in the Big Apple through an online questionnaire. New York University will collect the responses and comments and provide them to the NYPD for the department’s consideration in drafting the final policy.

“The questionnaire can be completed in minutes, is mobile-friendly, and can be submitted anonymously,” according to the NYPD Community Affairs Bureau. “It is designed to get community input on important policy issues, including the types of events that should be recorded and who should be allowed to see the body camera footage.”

The department has said that the purpose of the year-long pilot program is to establish procedures relating to the use of the cameras; and the “preservation, review, and sharing” of BWC footage.

“Body-Worn Cameras have the potential to be effective tools for recording officer citizen encounters, gathering evidence, and increasing compliance and accountability,” the NYPD stated in an operations order. “Through this pilot, the department will further examine the efficacy, feasibility, and cost of a larger deployment of BWCs by the department to its members.”

There are two ways you can provide your views, the agency noted. You can either fill out the questionnaire on the main points in the NYPD proposed policy, or you can upload a full set of your comments – or both.

Highlights of the department’s proposed body camera policy include:

Officers may not record:

The questionnaire can be found at nypdbodycameras.org. The site will remain open until July 31.