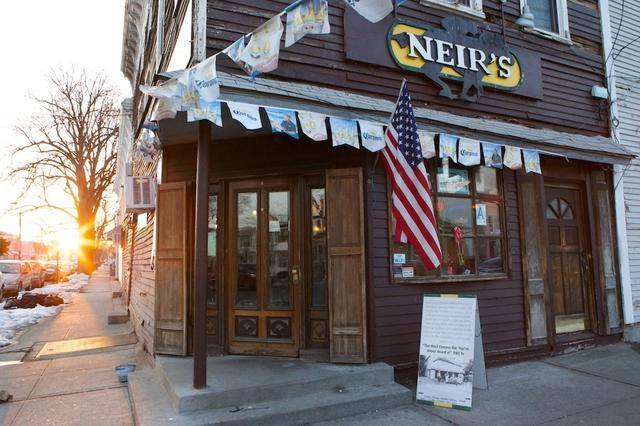 PHOTO: Neir’s owner Loy Gordon said he’s “so tired of Queens not getting the recognition it deserves.” Courtesy of Neir’s Tavern

The owner of Neir’s Tavern, a historic Woodhaven watering hole that has stood sentry at the corner of 78th Street and 88th Avenue for more than 130 years, told The Forum this week that he plans to appeal the Landmarks Preservation Commission’s recent decision to deny the bar’s application for official landmark status – and he apparently has plenty of support, even in City Hall.

“I think it’s an absolute slap in the face that they landmark a Pepsi-Cola sign in Long Island City over Historic Neir’s Tavern,” fumed Loy Gordon, a lieutenant in the FDNY who bought the bar in 2010. “We’re going to appeal this decision, and we’re glad the Mayor’s Office is now involved into looking into this travesty, and we’re trying to raise funds to pay for a consultant. I’m so tired of Queens not getting the recognition it deserves, and that’s why when Neir’s was three days from closing down forever, I jumped in to save it. Now it’s LPC’s turn to do their job by landmarking NYC’s oldest bar [that has] a tremendous amount of film history, Civil War history, horse racing history, architectural history and the community’s history, plus so much more original artifacts.”

Indeed the LPC granted landmark status to the giant Pepsi-Cola sign that was installed on the borough waterfront in the 1930s. But what truly angered Gordon was the commission’s explanation of its decision regarding the bar: It “does not rise to the level of significance to warrant landmark status.”

“The LPC reasoned that landmarking Neir’s Tavern will not protect it from future development and that Neir’s Tavern ‘does not rise to the level of significance to warrant landmark status’—but I guess the Pepsi sign does?” Gordon said. “Even though the Pepsi sign in its current location (1988) doesn’t even meet the basic requirements for landmark status, considering you have to be around at least 30 years. Neir’s has been around for 187 years!”

The Neir’s faithful are also appealing to the public via an online petition at change.org. As of Wednesday night, “Let’s Make Historic Neir’s Tavern a NYC Landmark” had 194 supporters.

“Sign the petition to tell the Landmark Commission Neir’s Tavern matters, Queens matters and we’re all part of the fabric of NYC history,” the petition reads.

Gordon said he feels that this is just the latest example of elitist Manhattan making a mockery out of the World’s Borough.

“This is another economic blow to Queens County,” he added. “Manhattan has four-times more landmarks than Queens, but yet is almost five-times smaller. These Manhattan landmarks have helped bring a record-setting 60 million tourists to NYC, which adds billions of dollars to the economy. By denying landmark status to Queens’ own Neir’s Tavern, you are denying thousands of potential jobs to Queens and this is the reason why we have the longest commuting time to work in the United States.”

For more information on the petition, visit https://www.change.org/p/landmarks-preservation-commission-lets-make-historic-neirs-tavern-a-nyc-landmark.