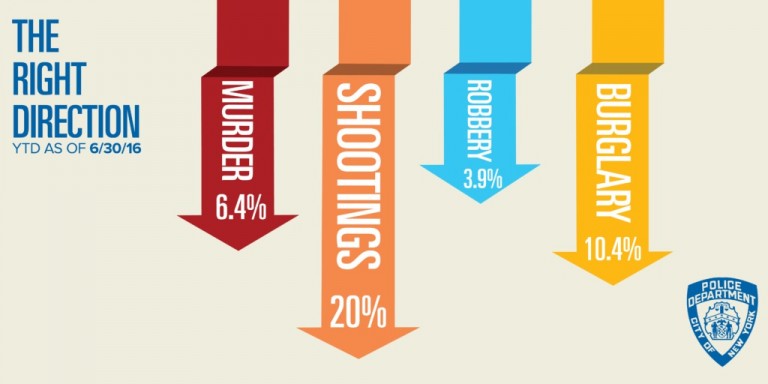 PHOTO: There were 121 fewer crimes in the city this June compared to June 2015. Courtesy of NYPD

No signs of a June swoon in this Police Department.

The City last month experienced a 1.4-percent decrease in overall crime, or 121 fewer offenses compared with the same period last year; making this the lowest single month of June for overall recorded crime in the modern CompStat era, according to the NYPD.

“Our highly focused investigations have led to the arrest of nearly 500 violent gang members since January,” said Police Commissioner Bill Bratton. “Additionally, it is my expectation that this level of precision policing, coupled with further advancements in technology, will catapult New York City to even lower levels of crime. All of this is under way as we continue to steadily improve the community’s experiences with the police through our neighborhood-based policing model.”

The City recorded 32 homicides last month, up from 26 murders in June 2015. However, the department noted 14 fewer shooting incidents in June 2016 (94) compared to the same 30-day period last year.

Bratton also spotlighted June 2016 as the tenth month in a row in which the City has documented fewer than 100 shootings – a first in the history of the CompStat era.

“Every day the women and men of the NYPD work to protect our city’s communities—and today, it’s clear New Yorkers are safer than ever,” said Mayor Bill de Blasio. “The numbers we’re presenting today are phenomenal: in the first six months of this year, shootings are down 20 percent while gun arrests are up 20 percent. Under Commissioner Bratton we are using precision policing to tackle gun violence and take these dangerous weapons off our streets. I want to thank all the members of NYPD for their commitment to keeping our city’s neighborhoods safe, while working to deepen the relationship between police and community.”

Indeed, if the first six months are any indication of what’s to come then 2016 is shaping up to be a banner year for the City’s Finest. Bratton pointed out that 2016 continues to follow a pattern of violence reduction. There have been 11 fewer murders and 110 fewer shootings, year-to-date, compared with 2015. Overall crime in 2016 is flat compared to 2015, with 53 additional crimes recorded, or a 0.1 percent increase.

“We will continue to drive crime lower, while also bringing our community partners together,” Bratton said. “Coupled with the incredible advancements in technology taking place within the NYPD, I am confident the NYPD will provide the kind of safety and fairness New Yorkers have come to expect from the greatest police department in the nation.”

Additional pertinent June 2016 numbers, compared to June 2015: reported rape ticked up one incident; robbery down 61 crimes, or 4.6 percent; felonious assault up 55 incidents, or 3 percent; burglary down 216 crimes, or 16.5 percent; grand larceny up 75 offenses, or 2 percent; and grand larceny auto up 19 crimes, or 3.3 percent.