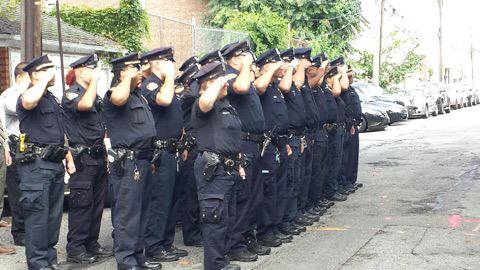 PHOTO: According to NYPD crime reduction stats for the first half of 2016, the 106th Precinct ranks 10th out of 77 city commands. Courtesy of NYPD

It’s been a compelling year, to say the least, in the 106th Precinct.

The commanding officer in March was transferred to the 105th Precinct. A month later, four officers shot and killed an armed suspect in South Ozone Park. And strained cop-community relations have hovered above all commands—nationwide—like foreboding storm clouds.

Yet it seems that the 106 has emerged from the fire as one of the five boroughs’ elite.

Captain James Fey, commanding officer of the 106, on Monday told The Forum that the south Queens precinct is among the top ten in the city in crime reduction for the first half of 2016 – ranked tenth out of 77 NYPD commands.

However, Fey noted that of the three murders, two carried over from a March incident at Johnny’s Restaurant and Bar in Ozone Park in which two patrons were engaged in a physical altercation and an employee suffered a fatal heart attack while attempting to intervene.

The 106 might have experienced an increase in burglaries in 2016 – 125 compared to 111 during the same period last year – but 2015 was a banner year for burglaries in the command: Last year, the precinct recorded the lowest number of burglaries since at least 1993.

And burglaries are down 25 percent over the past 28 days. Fey said the trend may be due, in part, to a 40-percent increase in the number of burglary arrests his officers have made this year.

Fey, who took over as top cop in March, said the 106 is not a precinct that rests on its laurels.

“We are glad to see the reduction in crime, but we understand that each crime number represents a victim at the end of that number,” he told The Forum. “We need to keep striving to keep crime down to the best of our ability.”