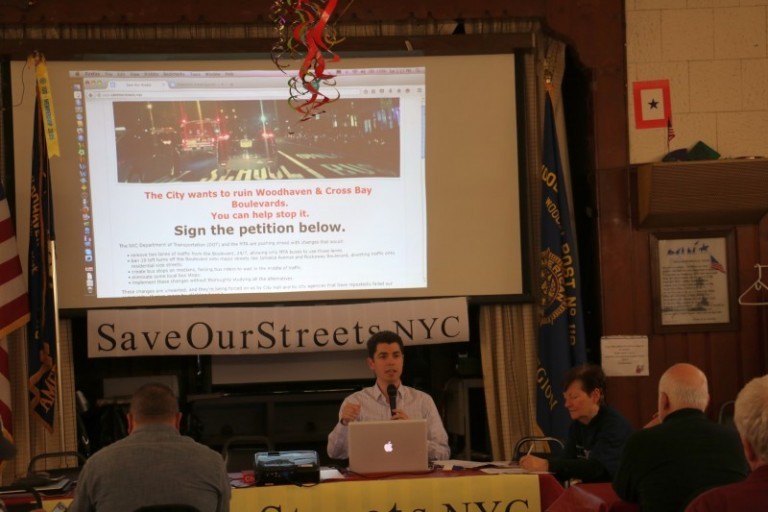 The following op-ed piece was submitted to The Forum by Alex Blenkinsopp of the Woodhaven Residents’ Block Association.

Transportation in southern Queens must be improved. The question is whether the Select Bus Service plan for Woodhaven and Cross Bay boulevards is the right approach. The answer is clear: This plan is foolish, expensive, dangerous, and absolutely wrong for the Boulevard.

That’s why multiple local organizations are hosting a rally this Saturday, Aug. 6, to fight the plan. The rally will be held at noon at the intersection of Woodhaven Boulevard and Jamaica Avenue, at the southeast corner (outside the bank), rain or shine. We hope to see you there.

It’s also why there’s a petition against this plan, which you can sign online at WWW.SAVEOURSTREETS.NYC or by calling (718) 296-3735.

Consider what the SBS plan will do:

First, it will eliminate two lanes of traffic 24/7, allowing only buses to use them. This means the same amount of traffic, squeezed into fewer lanes. It also means tickets for drivers who enter the bus lanes. It promises more congestion.

Second, this plan will move major bus stops off of sidewalks and onto medians. Bus riders will wait on islands with traffic passing by on both sides. Someone running to catch a bus at a median stop will now need to cross traffic, which is dangerous. In the winter, the snow is not currently cleared for pedestrians who rely on these islands for safety, so why should we expect them to be clear when bus riders are waiting there?

Third, this plan will prohibit left turns onto cross streets like Union Turnpike, Rockaway Boulevard, Penelope Avenue, and 101st Avenue. This will hurt nearby businesses. It will also divert drivers down side streets, increasing traffic on residential roads. This will be dangerous to families and detrimental to quality of life, especially because many vehicles diverted down residential streets will be delivery trucks.

Fourth, this will likely reduce parking. The Department of Transportation and MTA, which are guiding this plan, have been evasive about the parking impact. But consider Hoffman Drive by the Queens Center Mall, where the design plans erase more than a dozen parking spots.

Fifth, the proposal will cut half a dozen bus stops from the Q52/Q53 routes. DOT has been unclear about the proposal’s pricetag. DOT initially said a whopping $200 million. Then DOT Commissioner Polly Trottenberg reportedly testified that it was $400 million. Amid uproar, DOT backpedaled. We taxpayers can’t know how high the cost will climb.

DOT and the de Blasio administration are shoving this plan down our throats. They claim to want community feedback, but they ignored input from residents and local organizations; “feedback sessions” were really just attempts to sell their proposal. DOT fails to provide requested data or to reply to correspondence.

DOT’s track record in our community is dreadful. They’ve taken four years to install a speed bump in Woodhaven. DOT causes traffic jams outside a local school by denying parking to school buses transporting special-needs children. DOT persistently failed to fix its broken lights in Forest Park, even when there was a serial rapist prowling the park. I can go on and on.

We don’t trust DOT, and we doubt their competence. It’s time to scrap this foolish plan and go back to the drawing board, this time with true community input. Until then, we’ll continue to fight.

Blenkinsopp is the director of Communications for the Woodhaven Residents’ Block Association.