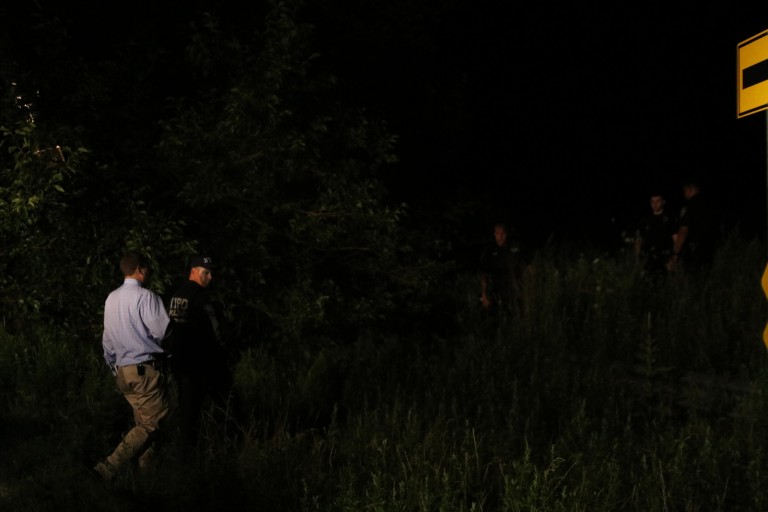 The distraught dad of a vibrant Howard Beach woman discovered her dead body late Tuesday night in Spring Creek Park, according to authorities and witnesses.

Philip Vetrano, who was already out with investigators frantically searching for Karina, 30, found her face-down in a marshland area within the vicinity of 161st Avenue and 78th Street; she had been strangled and showed signs that indicated that her assailant had also sexually assaulted her.

Karina Vetrano was initially reported missing around 7 p.m. She was last seen at approximately 5 p.m. by family leaving her residence at 165th Avenue and 84th Street to jog near Gateway National Recreation Area and had not returned, nor answered her phone.

Philip was helping cops scour familiar jogging paths that he and Karina used to frequent when the search party came upon her cell phone. Vetrano then bolted forward another 15 feet and discovered his daughter’s lifeless body.

NYPD Chief of Detectives Robert Boyce said on Wednesday that crime scene investigators had “recovered a lot of forensic evidence.” But as of early Thursday morning, cops had not made any arrests in the case. According to the New York Daily News Daily News, a police source told the paper that the killer was possibly a transient rather than a neighborhood local.

Karina Vetrano, who earned a master’s degree last year at St. John’s University, worked at nearby Vetro Restaurant & Lounge. The catering hall closed its Rooftop club on Wednesday night in tribute to Karina. Downstairs on the sidewalk, hundreds of mourners gathered for a candlelight vigil for the girl who “was always there, so beautiful and so talented,” Jackie Hartstein told the Daily News as she described her friend.

Vetrano was a passionate writer. At karinavee.com – “a collection of conversations, contradictions, & poetic conflict” – the expressive scribe bared her soul, at times, in an online journal:

“I write to savor the moments that I’m terrified will get lost and forgotten somewhere in time if I don’t document them. I write with the deepest intention to create a connection to anyone who takes the time out to read what I have to say. I write with the hopes that I can be understood; that I won’t feel so lost inside my own head, and that you, too, might find that solace as well.

“Most of the time I am thinking of ways in how I can be better, do better, feel better – whatever “better” really is. I spend the majority of my life in deep thought about everything. I think about how we all know we’re going to die, and yet that doesn’t seem to matter to any of us right now. How stupid and immature we all act, every one of us, when we focus on bullshit, when we are mean, and harbor anger. When we hurt people just to bring them down, when we put on fronts and play games with people we care most about – how completely pointless all that is, when we have a limited time here.”