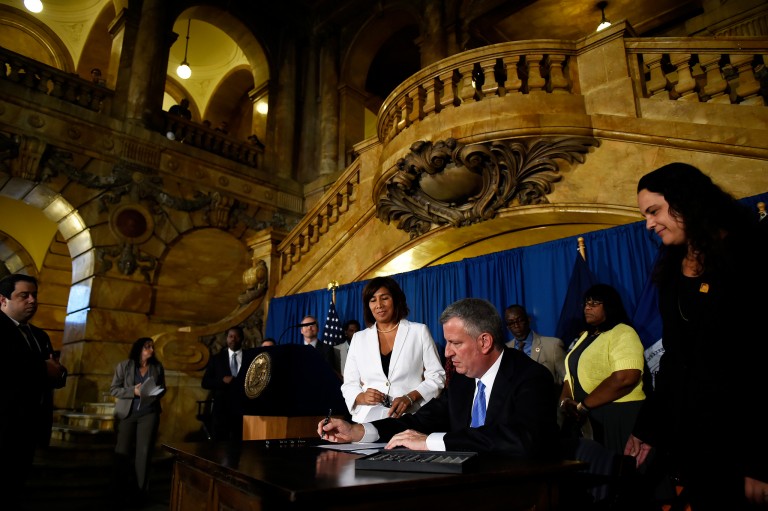 Mayor Bill de Blasio recently signed into law three bills that, as he said, aim to “improve transparency” at the City Police Department.

“When it comes to transparency and accountability, we can do more – and we have three bills that will take us even further in the right direction,” de Blasio said before adding his signature to Intros. 539-A, 606-B, and 824-A at City Hall.

“Recent events – recent tragic events all over the country remind us of the work that we have to do to bring police and community together,” the mayor said. “The NYPD is already retraining all officers to avoid the use of the force, and constrain the use of force, and to recognize and overcome implicit biases.”

Police Commissioner Bill Bratton, who was in attendance to see the bills signed into law, characterized the new pieces of legislation as “reflective of the new era of transparency that we’re trying to bring to the NYPD, working with the mayor and the City Council. The use-of-force reporting that will be available online for anybody to look where we are with some degree of intimacy – it is building on something we have done for many years in this city where we have reported intimately all uses of firearms in the department – firearm discharges. We have one of the lowest – if not lowest – rates of firearm discharge in America – 67 incidents last year with 36,000 officers in a city of eight-and-a-half million people.

“Similarly, our use of force in every other category,” Bratton continued, “we believe, is below the national average, but will now have transparency and intimacy very similar to what we’ve had with firearms for many, many decades available for all to see in the media, the pubic, the political leadership – reflective of the need for greater transparency as we work to improve and build upon the relationships that we must have with our communities.

Additionally last week, de Blasio signed into law two bills “that will give us a greater understanding of recidivism, and help us determine which Department of Probation programs are most effective.”