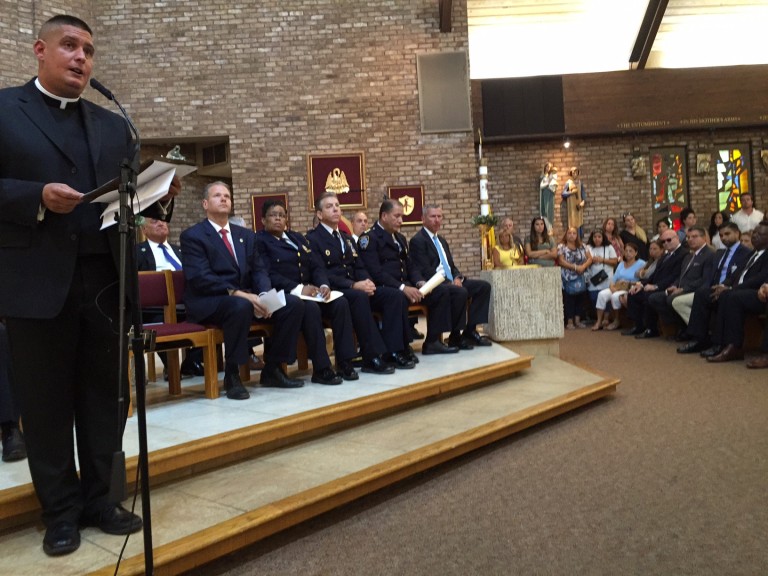 Howard Beach returned to St. Helen’s on Monday, two days after the tight-knit community rallied around the Vetrano family at the Rockwood Park church for Karina’s funeral, still searching for answers to questions that mount in the wake of such an unspeakable act.

Hundreds gathered to put rumors to rest, get the latest from elected and law-enforcement officials regarding the investigation into Karina’s brutal murder, and to learn about recent efforts to ensure the safety and security of residents.

“Tonight,” said Fr. Francis Colamaria, pastor of St. Helen’s, “I hope some light can be shed during this dark moment.”

The community has been wracked by palpable grief, anger, and anxiety since Vetrano, 30, was beaten, sexually assaulted and strangled while out on her daily run inside Spring Creek Park on Aug. 2.

“This is the very definition of ‘community’ – you have police officers, clergy, electeds, civic heads, business heads,” said NYPD Chief of Patrol Carlos Gomez as he addressed the sanctuary and hundreds more gathered outside the church. “Howard Beach is still one of the safest neighborhoods in the city.”

Assistant Chief Michael Kemper, commanding officer of the Queens South Detective Bureau, echoed Gomez’s sentiment, adding that “the cooperation between police and community here is the best I’ve ever seen in my 20-year career.”

Kemper also said on Monday at the Town Hall meeting that he would refrain from going “into specifics” on the case – evidence recovered, leads, etc. – because “the individual or individuals who did this horrendous act maybe watching me right now, and I’m not going to give them what I have.”

Asked if Vetrano’s slaying and that of city resident Vanessa Marcotte, who was killed on Sunday while jogging near her mother’s home in Princeton, Mass., are related, Kemper said that at the moment “we don’t believe” there is a connection.

“That said, we will continue to share notes and compare evidence as both cases progress,” he added.

Vetrano was murdered in an area of Spring Creek that is notorious for tall weeds and shady characters after hours. Many residents’ concerns centered on the federal green space.

“Those weeds are not a park,” declared Joe, a 25-year Howard Beach resident. “The petition we need to be signing is the one to close that park – lock it up, don’t let anyone in there whatsoever!”

Colamaria said he would have to humbly disagree with Joe.

“It is a park – a park that Karina loved,” Colamaria noted. “Her parents told me that. We just have to make it safe.”

Queens Borough President Melinda Katz said that she was able to secure funding for surveillance cameras to be installed around Spring Creek.

“It’s important for folks to know: You enter there, you exit there, you’re going to be filmed,” Katz said, eliciting a round of applause.

The meeting came a day after Philip and Cathy Vetrano addressed the press outside their home, blocks from where their daughter was killed.

“I’m here to remind you, in case you don’t already know, that now it’s the whole entire world against you,” said Cathy Vetrano as she tore off her sunglasses, glared into the camera lenses, addressing the assailant directly. “The whole entire world knows what a pathetic, puny, weak, piece of filth that you are. And soon, I know they’re all going to know your face as well. Soon we’re going to have a face to the d**kless piece of garbage that you are. And above and beyond all, you know that my daughter was a force to be reckoned with. I guarantee you, I guarantee you, you motherf***er that you will be reckoning with that force not only for the rest of your pathetic life, but for the rest of eternity as you f***ing burn in hell. I guarantee you that.”

On Monday, back at St. Helen’s, Colamaria reminded the enduring community of the two words that were taped to Karina’s bedroom mirror: self respect.

“I truly believe that this neighborhood of Howard Beach is a self-respectable place,” he said, “where family, friends, and faith are held in the highest regard.”