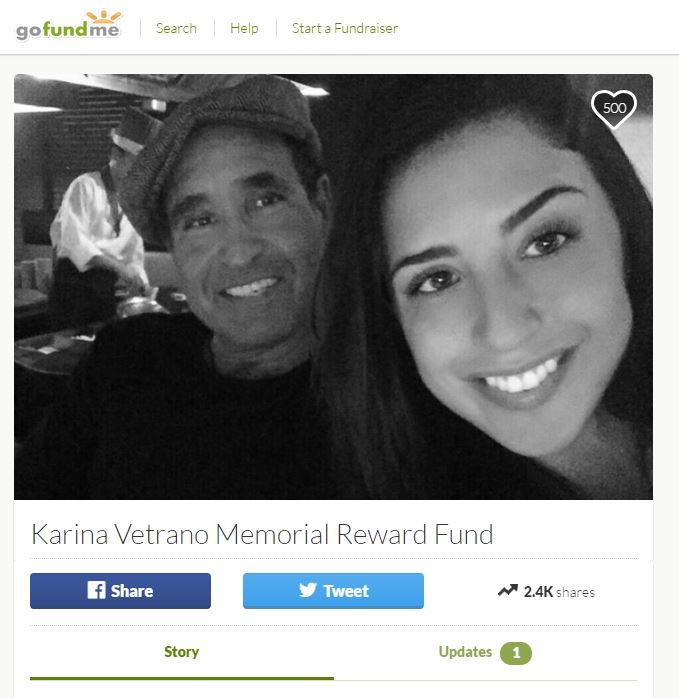 PHOTO: The reward fund was organized and set up at TD Bank on Tuesday. Courtesy of GoFundMe

The angst-ridden father of a Howard Beach woman who was brutally murdered last week as she jogged in Spring Creek Park made an impassioned plea to the public on Wednesday, imploring those who can identify her assailant to call the NYPD tip line and directing anyone who wants to help to donate to a newly formed reward crowdfunding campaign.

Philip Vetrano, who discovered Karina’s body in the park marsh on Aug. 2, appealed to the city to visit the Karina Vetrano Memorial Reward Fund page on GoFundMe.com – and the response seems to have struck a chord nationwide.

“We are a committee of 5 people who represent the Howard Beach community, and we are joined by Karina’s parents, Cathy and Phil, in establishing this page,” they wrote in the Story section of the site. “The money that we seek to raise here is to supplement the $20,000 reward currently offered by the NYPD. While we greatly appreciate the help of the police, Howard Beach is a community not known for sitting back while other people work on our behalf. Karina has become the ‘daughter’ of the entire community and we are committed to seeing justice served in her memory.
“We need your help in bringing this vicious animal to face the most severe punishment allowable by law.”

Vetrano, during the Wednesday press conference announcing the GoFundMe page, urged those with information on his daughter’s killer to do the right thing.

“Somebody knows something, somebody’s got to say something,” he said. “And with this amount of money, maybe they will.”

Asked if he’s had time to heal, Vetrano replied that he doesn’t believe he’ll ever truly be able to. But until a certain “vicious predator” is brought to justice, he indicated that he has to keep busy.

“If I wake up and there’s nothing for me to do – that’s when the bottom is going to drop out,” he said. “I have to stay involved, every day in every way. Today it’s this…this is keeping me alive.”

You can also donate to the fund at any TD Bank branch.