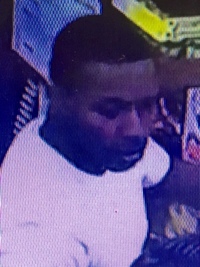 PHOTO: According to investigators, the suspects (one is pictured) brandished a gun and snatched the victim’s bookbag as he was walking home in the vicinity 101st Avenue and 131st Street. Courtesy of NYPD

Police have reached out to the public for help in identifying a pair of stick-up crooks who robbed a man at gunpoint earlier this month in Richmond Hill.

According to investigators, shortly after midnight on Thursday, Aug. 4, the two suspects approached the 38-year-old victim as he was walking home in the vicinity 101st Avenue and 131st Street, pulled out a firearm, and forcibly removed his bookbag, which contained credit cards, an undetermined amount of cash, and his cell phone. There were no injuries. The suspects fled on foot “to parts unknown,” cops said.

The perpetrators are described as black men in their 20s, approximately 5-foot-10, 165 pounds, with brown eyes and short brown hair.

The Crime Stoppers Program offers rewards up to $2,000 for anonymous information that leads to the arrest and indictment of a violent felon. The program is supported by the City Police Foundation, and focuses on solving high priority violent crimes.