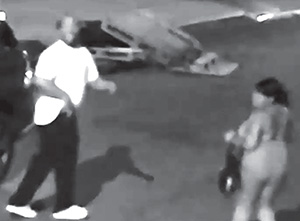 Police said they want to talk to the pair about an August incident in which they allegedly fired multiple gunshots into the air near an intersection in Richmond Hill.

Cops have released surveillance video and still images to the public for help in identifying a man and a woman wanted in connection with what authorities have described as a reckless endangerment incident that occurred in Richmond Hill about a month ago.
On Friday, Aug. 12, at approximately 4:15 a.m., in the vicinity of 130th Street and 90th Avenue, the two suspects fired multiple shots into the air; no injuries were reported, according to investigators.

The first individual is a black man, in his 30s; last seen wearing a white T-shirt, dark-colored pants and white sneakers.

The second suspect is a black woman, also in her 30s; last seen wearing a dark-colored shirt and carrying a black purse.