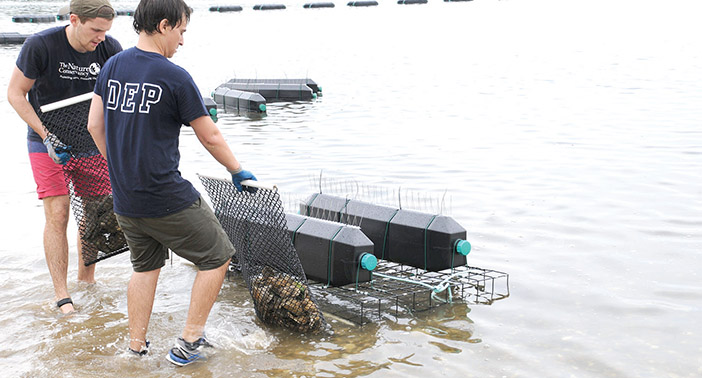 Oyster beds also deflect and reduce the energy of waves, helping to protect critical Jamaica Bay wetlands, according to the DEP.

Jamaica Bay will soon be implanted with 50,000 breeding oysters, the largest single installation in New York City, after Mayor Bill de Blasio and the Department of Environmental Protection (DEP), in partnership with the Billion Oyster Project, have announced the project is underway.

Once blanketed by oysters, the New York/New Jersey Harbor have become functionally extinct decades ago after over harvesting, dredging and pollution. Oysters are widely recognized as a key component of a healthy marine ecosystem as they filter pollutants from the water, help to protect wetlands and shoreline from erosion and storm surge, and provide habitat for communities of fish and other aquatic organisms. Once the oyster installation is complete, water quality in the vicinity of the beds will be monitored for anticipated improvements in dissolved oxygen, nitrogen removal and turbidity. In addition, the beds will be evaluated for the recruitment of new oysters. The project is being funded with a $1 million grant from the U.S. Department of Interior, which is administered by the National Fish and Wildlife Foundation (NFWF). DEP is contributing $375,000. The Billion Oyster Project and students from the Urban Assembly New York Harbor School will assist with the installation and monitoring of the oyster beds.

“The restoration of oysters back into the waters of Jamaica Bay is one of the key remaining goals to fully restore this great and unique ecosystem,” said Dan Mundy, Jamaica Bay Ecowatchers.

The installation will include a central donor bed composed of 50,000 adult and spat-on-shell oysters as well as four smaller receiving beds composed of clam/oyster shell and broken porcelain. The porcelain was harvested from nearly 5,000 inefficient toilets that were recycled from the citywide water conservation program.

Existing water quality monitoring at the site of the oyster beds will serve as a baseline for future comparison. Monitoring will continue for two years after the installation of the beds in order to establish water quality benefits provided by the oysters.

The next step in restoring oysters in Jamaica Bay is to determine the effect of placing larger oyster beds in areas that could protect salt marshes from further erosion while improving water quality.

Billion Oyster Project is an initiative of New York Harbor Foundation, which also supports the programs of Urban Assembly New York Harbor School. On September 16, 2016, the Harbor Foundation will hold the Sixth Annual New York Harbor Regatta and Regatta Bash to help fund the work of BOP and the School. For tickets, visit www.nyharborregatta.com/tickets; for more information about BOP, visit billionoysterproject.org, like us on Facebook, or follow us on Twitter and Instagram.