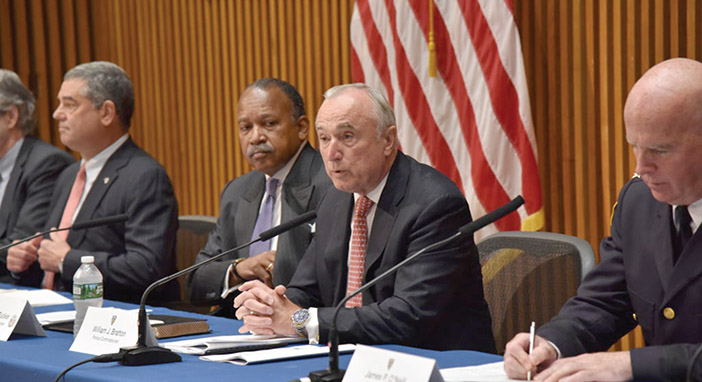 Police Commissioner Bill Bratton and the NYPD immediately issued “Broken Windows is Not Broken” – the department’s response to the Inspector General’s report on quality-of-life enforcement.

City Police Commissioner Bill Bratton last week roared back at the Department of Investigation’s Office of the Inspector General for the NYPD, ripping its June report on quality-of-life policing as a “deeply flawed” analysis “without merit” that “perpetuates misunderstandings about a police strategy that is critical to the well-being of New York City.”

Following a “months-long” analysis of six years of summons, arrest, and complaint data, the OIG indicated that it “has found no empirical evidence demonstrating a clear and direct link between an increase in summons and misdemeanor arrest activity and a related drop in felony crime.”

Bratton and the NYPD have issued a scathing 41-page response to the OIG report, blasting everything from its methodology to “its veiled attack on the concept of Broken Windows policing.” Bratton added that, through its response, the NYPD “must also categorically refute any insinuation that Broken Windows policing is racially discriminatory.”

“Going back as far as 1978, in the streets of the Fenway, I have seen community complaints about quality of life conditions dominate conversations between the community and the police,” Bratton said. “The NYPD’s Neighborhood Coordination Officer Program re-affirms what I learned all those years ago, that neighborhood residents expect action on the part of the police regarding lesser crimes and signs of disorder. Enforcement targeting these conditions has become known as “quality-of-life” policing, and it has been frequently disparaged as a vehicle of oppression that creates racially disparate outcomes. That could not be further from the truth. This type of policing is an essential tool of community engagement and trust building, most often in direct response to community concerns. Quality of life policing will remain a key strategy for the NYPD.”

The department also pointed out that it does not stand alone in its rejection of the OIG report.

“Two independent criminologists, Richard Rosenfeld and David Weisburd, have also roundly criticized the report, citing: problems with its research and statistical methodology; the lack of consideration for officer discretion; and the omission of the 16 years prior to 2010 — when misdemeanor arrests strongly correlated to the largest crime decline in New York City history,” the NYPD wrote. “These criminologists have also determined the analysis contained in the report is not strong enough to support its conclusions.”

In conclusion, according to Bratton and the NYPD, “the OIG has issued a report using questionable methodology and has reached unsupported conclusions challenging a police strategy that has been central to the city’s efforts to promote public safety while also enhancing trust and public confidence in the police department. This report perpetuates misunderstandings about a police strategy that is critical to the well-being of New York City and has played a central role in creating the safest big city in America.”