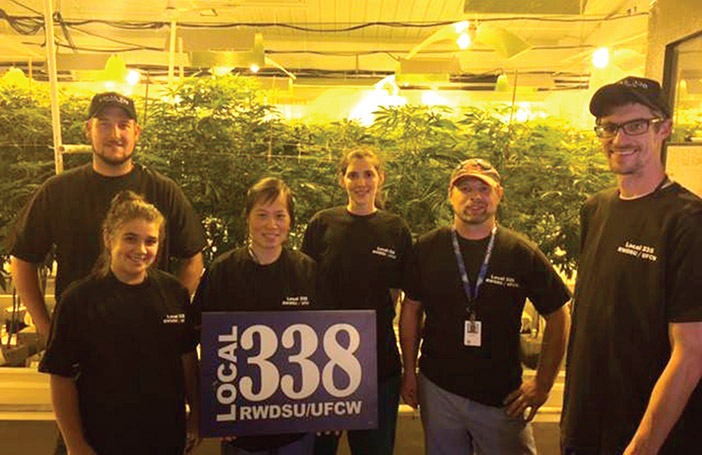 Local 338 of the Retail, Wholesale, and Department Store Union, UFCW, and Vireo Health New York recently announced that they have reached a labor agreement – the first union contract in the history of New York State’s new medical cannabis industry.

The agreement, according to Vireo, covers current and future employees at its cultivation and manufacturing facility in Fulton County’s Tryon Technology Park, and at all four of its dispensaries in Albany, Binghamton, White Plains, and on Queens Boulevard in Elmhurst. The contract provides a living wage with guaranteed raises, paid time off, healthcare coverage and retirement benefits.

“The strong union contract approved by the workers at Vireo will ensure that they have secure, middle class jobs so that they can provide for themselves and their families,” said John Durso, president of Local 338 RWDSU/UFCW. “The workers in this industry are incredibly dedicated to the patients they serve. This agreement provides the peace of mind that will allow them to focus on what matters most: helping those who are suffering and creating quality medicine.”

Vireo Health, LLC, the parent company of Vireo Health of New York, operates subsidiaries in Minnesota and Maryland and is the only medical cannabis company in the country to have partnered with labor in three states.

“I am happy to learn of the labor agreement struck with Vireo Health of New York, Local 338 of the Retail, Wholesale, Department Store Union, United Food and Commercial Workers,” said State Sen. Toby Ann Stavisky (D-Flushing). “Securing labor unions means those charged with helping provide relief to people with debilitating illnesses remain a thriving part of the middle class and raise their families with pride.”

State Sen. Diane Savino (D-Brooklyn and Staten Island) added, “I am very happy to see that Vireo and RWDSU have reached agreement on a fair contract for medical cannabis workers at Vireo’s production facility and dispensaries. We have always had two goals with the New York medical cannabis program: to provide effective medicine and relief for patients suffering from severe illnesses, and to create economic development and good paying jobs. With the news of the contract negotiated between Vireo and RWDSU and the expansion of the medical cannabis program announced by the Department of Health last week, we have moved tremendously closer to accomplishing both of those goals. I salute Vireo and RWDSU for negotiating this contract. I hope the other four medical cannabis companies in New York will soon follow.”

Vireo opened the borough’s first medical marijuana dispensary at 89-55 Queens Blvd. in Elmhurst in January. Vireo is one of five companies to be awarded a license to manufacture and provide pharmaceutical-grade cannabis-based medications in the state. Bloomfield Industries runs the city’s only medical marijuana production facility in Long Island City.