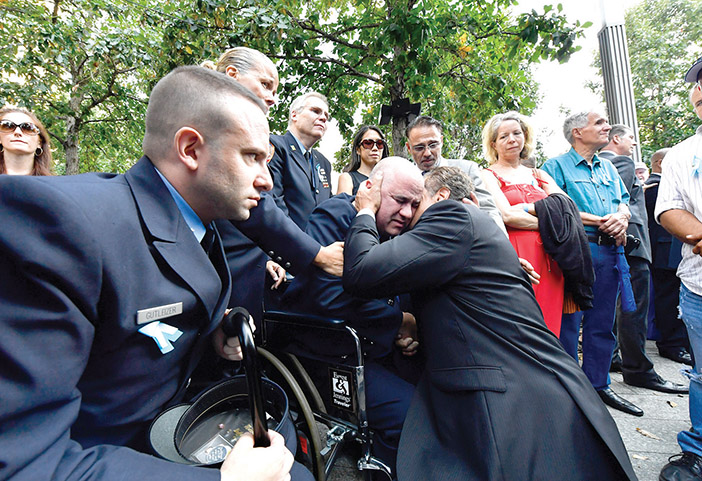 Photo Courtesy of the Governor’s Office

Gov. Cuomo shares an emotional moment with a sick firefighter on Sunday at the World Trade Center site. On Sept. 11, 2016, Cuomo announced that he had signed legislation to extend the period for workers and volunteers seeking benefits as a result of their involvement in the Sept. 11, 2001, rescue, recovery and clean-up operations.

On Sunday, Sept. 11, 15 years after the 2001 terrorist attacks on New York City, Gov. Andrew Cuomo signed legislation to extend the period for workers and volun­teers seeking lost wage and medical ben­efits as a result of their involvement in the rescue, recovery, and clean-up operations at Ground Zero in Lower Manhattan.

The bill pushes the deadline for indi­viduals to register under the WTC Disabil­ity Law to Sept. 11, 2018. The extension will allow additional individuals to receive workers’ compensation, disability, and ac­cidental death benefits for their participa­tion in the WTC post-attack operations.

“Though September 11th may feel like an eternity ago, we still feel the pain and the loss like it was yesterday, and the thousands of brave men and women who stepped up in our darkest hour are still grappling with the aftereffects,” said Cuomo, a Queens na­tive. “We vow to do whatever we have to do to provide these brave men and women and their families the benefits they deserve. As New Yorkers, when we are knocked down, we get up twice as strong because we have our fellow New Yorkers to raise us up. The volunteers and workers raised us up in our time of need, and we will ensure they get the resources and the support they need.”

Cuomo added that he also strongly encourages all Sept. 11 responders to con­sider using the World Trade Center Health Program, administered by the National In­stitute for Occupational Safety and Health for both treatment and monitoring of their health. This program, established by the James Zadroga 9/11 Health and Compen­sation Act of 2010, was recently funded by the federal government for 75 years. Re­sponders at the WTC and related sites in the Pentagon and Shanksville, PA, and sur­vivors who were in the New York City di­saster area are seen at the clinics by experts in the field, without charge. In addition to treating illnesses, the clinics begin moni­toring the health of responders. Services are available at many Clinical Centers of Excellence in New York City, Long Island and New Jersey, as well as through a nation­wide network of providers, Cuomo noted.

As of June 30, 2016, there are approxi­mately 75,000 responders and survivors enrolled in the WTC Health Program.

“The 9-11 registry reopener law is im­portant and will help our members and other New York first responders who may get sick as result of their work in the wake of the terrorist attack on our city,” said Steve Cassidy, president of the Uniformed Firefighters Association.

“There is no expiration date for the he­roic sacrifice of the New York City police officers and other first responders and vol­unteers who were made ill by their service in the weeks and months following 9/11,” added Patrolmen’s Benevolent Association President Patrick Lynch. “It is critical that they receive the compensation and care they deserve, for as long as they need it. We applaud the Governor and the Legislature for extending these important benefits.”

For more information on the WTC Health Program, visit cdc.gov/wtc.